Vivienne Kennedy reviews Disney’s Beauty and the Beast, playing at the Bristol Hippodrome until Saturday 18 September.

To say my daughter and I were excited about returning to this glorious theatre for the first time in 18 months would be a massive understatement, we were expecting something fantastic, and we weren’t disappointed for a moment.

Most of us are familiar with the story of the arrogant prince, cursed when he refuses to help an old lady; he is transformed into a monster and his servants turned into household objects. The changes will become permanent when the last petal falls from the enchanted rose he’s been given, and time is running out. Only one thing can save him and his team, he must learn to love and the object of his affection must love him in return. Thank goodness for Belle, the slightly odd (in that she reads a lot) but very beautiful girl from the village who turns up at just the right moment.

Disney turned the traditional French fairy tale into a cartoon in 1991 and the stage musical opened on Broadway three years later. This is a brand new production, premiering in Bristol before travelling to Liverpool, Edinburgh and Cardiff, and it’s utterly joyful.

Directed and choreographed by Matt West and starring Courtney Stapleton as Belle and Emmanuel Kojo as Beast, this show has everything you could ask for – a good story with moments of drama, comedy and romance; striking costumes and scenery (that library… want!); songs that stay in your head; and fantastic ensemble dance routines, particularly ‘Gaston’, which should win an award for the best use of beer tankards in a stage show, and ‘Be Our Guest’, which was just all kinds of wonderful.

Realising the latter routine was about to start, the young girl on my right let out an audible squeal of excitement, closely followed by a similar noise the other side from my own little girl; I smiled as I glanced towards her, noticing she was gently stamping her feet in glee. She turns 30 in a couple of weeks, proving this really is a show for all ages!

I could go on and on, praising and name-checking every member of the cast and creative team. Instead, let me just say the casting is spot on and the lighting, sound, animations, illusions, orchestration and everything else that goes towards making a show work are faultless.

As we took to our feet for a well-deserved, and totally expected from the very first moment, standing ovation, I found I had tears in my eyes, happy tears. As we emerge from the strange dystopian world we’ve found ourselves in for the past 18 months, a world in which song and dance was banned, I am so grateful to Disney and the Bristol Hippodrome for reminding me that hope and joy do still exist and can be found in a tale as old as time – thank you x.

For further information and to book tickets, visit https://www.beautyandthebeastmusical.co.uk/. (You’ve only got a few days left to catch it in Bristol, but Cardiff’s not far away and it’s playing there from 9 December until 15 January)

Photos: Emmanuel Kojo as Beast and Courtney-Stapleton as Belle with the cast of Disney’s Beauty and the Beast; photo by Johan Persson ©Disney 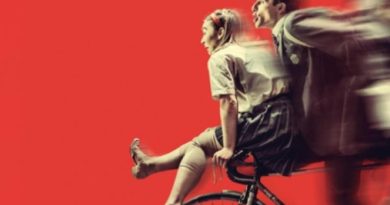