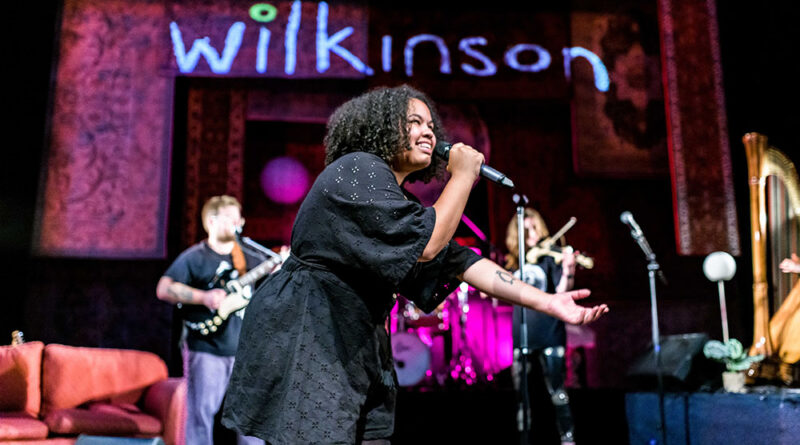 Malaika Kegode’s Outlier isn’t easy to categorise, it’s not really a play or a gig but something in-between, a story told to music with animations giving a cartoonish feel at times. It’s intimate and lovely, Mal is warm and engaging and it’s easy to think that you’re listening to a friend telling their tale. The music is supplied by a band, Jakabol, consisting of guitar, drums, violin and harp/flute, and the musicians smoothly transition between genres and moods. I suspect I’d enjoy a standard gig of theirs but this was something a little bit magical.

The story is heartbreaking and it did bring me to tears more than once. It’s a cautionary tale about drug use in young people, about the limitations of life in a small town, about ambitions that never get realised, dreams that die and people that get lost in chemical dullness. It’s about young love, emotional abuse and escape. At the start it’s light and funny but already overshadowed. I’m not a child of the 90’s or 00’s but some things cross generations. I recognise the ‘types’.

The young man who is all light and joy and eccentricity until things get difficult and he just can’t cope with adversity, and the girl who slips into depression and isolation as she loses him piece by piece. The girl who stays on the periphery, observing as things change for the worse and unable to prevent her friends following the paths they’ve chosen. The young man who wants to try everything and thinks he’ll be different somehow, that he won’t be the one to become addicted.

The one I identify with most, Mal herself, who falls into a relationship that has nothing to offer her because she thinks she needs to look after him. Some stories may be told over and over again but that doesn’t mean they lose their power. As the story develops along familiar paths we can only watch and wait for the inevitable outcomes, hoping that some will make it out alive and well. This is a true story, both in this particular iteration and more generally.

I took my 16 year old to see it and he didn’t find it so powerful which I suspect is because he doesn’t know these people and these situations yet, and I hope he never really will. He still liked it, especially the music, but I don’t think he really understood my tears.

It wasn’t all darkness: this is a true story and Mal is on stage to tell us all about it, how she came to Bristol and found new friends, on stage with her with their instruments. The rapport between Mal and Joe Williams on guitar is obvious, though as my son cynically pointed out ‘well, Joe did tell us he’s got a drama degree so he’s able to act it’. I prefer to think it’s authentic, and it did feel like the band were a team who worked well together.

I’m glad I went to see it, it did all the things that I like theatre to do – there was good music, it took me into the story and away from myself, I cared about the people and their lives. The animations were clever and appealing and the production as a whole was really well done. I’ll definitely be looking out for both the band and for Malaika Kegode in the future.

For further information and to book tickets, click HERE.

Can’t make it to the theatre?

You can also watch Outlier On Demand wherever you are.

Click HERE to rent the 2021 filmed Live Broadcast of Outlier for 48 hours from when you hit play.