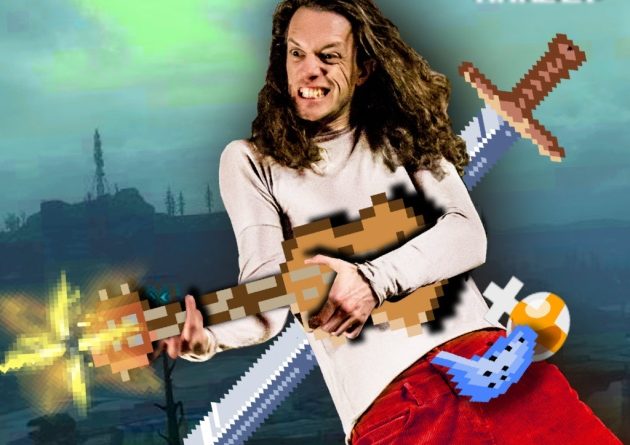 If I am honest, I was uncertain about attending this show this evening for two very good reasons. Firstly, I was lucky enough to see a fabulous Royal Shakespeare Company Production of Hamlet a few years ago and secondly, I absolute adore the Tom Stoppard play Rosencrantz & Guildenstern Are Dead. I did not want those fond memories damaged by a short and silly play. However, my fears quickly proved unfounded and this play actually increased my enjoyment of Shakespeare’s longest play.

Super Hamlet 64 is a retelling of the tale of the Dane, through the medium of computer game analogies, similes and songs, performed by the artist Edward Day. The first introduction of Edward the performer was when they entered the stage, looking vaguely uncomfortable, if a little shy and then engaged with the front row of the audience in Clevedon’s wonderful Theatre Shop with the graceful poise of a seasoned performer. Edward’s performance has a sincere fragility to it, a soft humour and then almost from nowhere came sudden barbed threats of extreme violence! All of which was entirely enjoyable and it made us feel a kinship with the artist, who stood, spiritually exposed and barefoot on the dark stage.

Slipping into the world of Edwood was remarkably comfortable, even for a jaded old has-been gamer like me. In truth, the last game I played was a Linux clone of Lemmings, called Pingus and before that it was the zombie holocaust horror game,  Resident Evil, back when it was released at the end of the nineties for the original Playstation. However, even as out of date as I was, I was still able to identify many of the games used in this evenings narrative.

Edwood’s performance is an earnest  mixed bag of emotions, starting from the innocent vulnerability of their first steps on the stage, then slipping into the role of the wistful minstrel playing the ukulele, before suddenly dropping into the raging monster seeking vengeance for the death of their father. Each aspect of the character was entirely believable and richly played, even on such a sparse stage.

The stage is a character in itself, what at first appears to be a simply lit empty space, before rapidly turning into another world with a projector showing rapidly evolving graphics, interspersed with pre-recorded music videos. It is here that Edward shows themselves to be an accomplished multi instrumentalist, playing almost all of the instruments seen in the footage. For some people this might have been a little unusual, because Edward also played many of the characters in the band, even those who appeared strongly male or strongly female. This is not a throwback to the androgyny of the seventies that was made popular by the likes of David Bowie, but rather a strong statement of a modern gender fluid dynamic and Edward played each role with conviction. It is for this reason that I am not using the usual male or female pronouns, so you can imagine my disappointment when the lighting director/stage manager who spoke to the audience during the intermission and was unable to refer to Edward as anything other than in a male role. Maybe my own gender variance made this more of an issue for me, but to my mind it did seem a little disrespectful.

The play sticks fairly strictly to the story of Hamlet, with King Hamlet depicted as Super Mario and Claudius the dead King’s brother as Luigi, Mario’s Brother. This simple change was wonderfully played and again raised a laugh from the audience. Later in the story, my two favourite characters (when given life in Stoppard’s play), Rosencrantz & Guildenstern came split as four equally compelling computer game characters, which to my mind was inspired. This was quickly followed by a complicated and clever use of the Aperture Science Handheld Portal Device (ASHPD) from the game Portal, which dispatched them with great, if rather painful  velocity! Even though this is a joke that I have seen used else where a few times now, such as on the TV show Rick and Morty, I was very impressed to see it used so effectively live on stage, even with such hilarious violence!

One aspect I really did enjoy was Edward taking Ophelia, more usually depicted as the tragic weeping maiden and turning her into a super heroine, wielding the BFG from Doom (For those of you who do not know this reference, the BFG is a big err… gun.) to slay the Mecha form of Luigi, who had set out to kill everyone in the whole world!

This retelling of Hamlet using the simple if shorter terminology used in computer games is an engaging way of breaking into a more profound and complex world. For the purist Shakespeare fan, I suspect that this was an intolerable bastardisation of a beloved script. But for the more open minded theatre goer, or the casually interested and well read gamer, this was outstanding and would likely see them take the first steps of a long journey into the Shakespearean world. Be warned though the original play is a dark and often depressing tragedy and lacks the jokes, the songs and most of all the BFG of this production!

I was not alone in enjoying the evening, everyone else around me also seemed to really enjoy the show too and those lucky enough to interact with Edward were given the chance to perform a few tiny if short lived roles too. This play which before seeing appears frivolous or even a little silly, is at heart still a complex piece of theatre, it retains much of the darkness of the original and it is propelled beautifully by the fragile and powerfully athletic Edward. The truth is that Edward is a complicated and intriguing performer and I would love to see more of their work. With only one night of Super Hamlet 64 left, I do believe that they are worthy of seeing again in the other shows that they are touring with. The next show, Too Pretty to Punch, looks to be a powerful piece of social commentary and I truly hope that it comes to the Theatre shop in Clevedon.

One small tip to those who visit the theatre shop, take a cushion with you. The seats are uncomfortably hard after the first half of a performance and it takes a really good show to block out the pain for the second half! 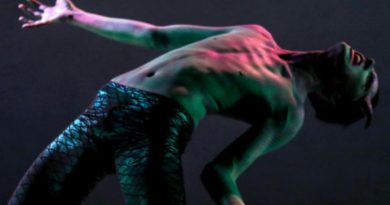