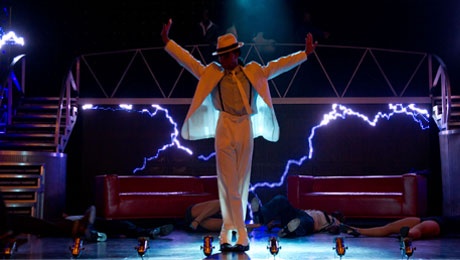 You would be hard-pushed to find someone who wouldn’t associate the word Thriller with the American pop Icon Michael Jackson.  At the end of 1982 he released an album of the same name, which went on to become the biggest selling album of all time.   The accompanying 14 minute horror-themed music video was also voted as the most influential pop music video of all time. This touring production of London’s West End hit musical name-sake on at the Bristol Hippodrome is a non-stop, two hour extravaganza charting the music and dance of Michael Jackson from his childhood days in the Jackson Five through to his untimely death in 2009 at the age of 50.  If you are more interested in the drama of his documented troubled life rather than a celebration of his musical creativity, this may not be the show for you. Whilst impressive facts and achievements are narrated throughout the production, the thrust is totally up-beat and happy, and steers completely away from the speculation and gossip which dogged Jackson for much of his later life.

The audience certainly went in with the intention of enjoying themselves.  Costumes abounded, sequins, white gloves and hats adorned with fairy lights.  People were a little shy to join in at the beginning, but were soon clapping and singing along with the cast, and were up on their feet and dancing by the end. The whole production had a feel of ease about it, which was down to the professionalism and talent of the production team, the singers, the dancers and the musicians, who worked together seamlessly.  The background set and visual were fascinating, and supported the narrative of the songs.  Beginning in the late 1960’s, the songs and costumes took me back to my childhood – ‘ABC’, ‘Rockin’ Robin’, ‘I Want You Back’.  We then moved on through the disco years – sequins and lycra trousers abounding.  The lighting was amazing – if you go and see the show, look out for the spectacular glitter ball as you move through this era.  The set designer, Jonathan Park, also created the settings and visuals for Pink Floyd’s 2005 return concert at Live 8, who are renowned for their light shows.  The first half concluded with songs from 1979’s ‘Off The Wall’ album.  The second half moved swiftly into the 80’s and 90’s with music and dance routines from albums such as ‘Bad’, ‘Dangerous’ and of course, ‘Thriller’.

Of the six multi-national singers who performed Jackson’s songs, my own favourite was The Wirral’s own Rory Taylor, who was in the final of ITV’s Superstar in 2012.  Unlike other cast members, Rory is not saddled with the task of having to look and moonwalk like a Michael Jackson clone.  Whilst acknowledging the importance of an accurate Jackson tribute show (after all this is the closest thing to Michael Jackson we’ll ever be able to see), I really enjoyed the originality and feeling that Rory was able to bring to the songs, in particular ‘She’s out of my life’.  It was great to have two female singers too, it broadened the scope of the production being a purely one dimensional imitation of Jackson.  Earth Song was performed with real feeling and emotion, I probably listened to the lyrics of this properly for the first time. The dancers were phenomenal – the energy, talent and stamina is breathtaking.  And for all you die-hard Jackson fans out there, there was Moonwalking a-plenty, and it was spectacular!  The famous Anti-Gravity Shoes were also in evidence, much to the delight of the audience. There were two moments of humour for me – the first was when the band (who were superb) were  suddenly revealed as the doors opened on a ‘box’ at the back of the stage.  It momentarily reminded me of Grandad shut in the toilet under the stairs in Mrs Brown’s Boys, especially when the doors closed on them again!   Happily the guitarists did manage to escape onto the main stage quite frequently, which was a bonus as they were great.  My companion, a die-hard rock fan, was most impressed to see the guitarists sporting both an AC/DC t-shirt and a Star Wars t-shirt, therefore proving that the show does cater for all tastes! Another fun moment was the punk-style head-gear worn by the dancers during ‘Dirty Diana’.  All I could think of were those 1970’s fibre-optic lamps – if they had suddenly lit up, it would have been the final touch.

As you would expect, the climax to the show was a storming performance of THRILLER, complete with zombies and all the dance moves.  I suppose for very small children, this could have been a little bit scary, but on the whole the show was very family friendly.  As it happened, there were very few children in the audience tonight, possibly owing to it being an evening showing and also at the beginning of the week.  If you are a Michael Jackson fan, you will love this performance.  If not, you will still inevitably get caught up in the enthusiasm of the cast and audience and end up on your feet, dancing and singing along.  I couldn’t help thinking how spectacular the shows planned for the O2 Arena in 2009 would have been had Jackson lived.  One word of caution – despite the air con being on throughout the performance, it was still very hot so do go dressed appropriately and be prepared to take off sequinned jackets, cloves and hats during the show – they can always be donned again in the interval!  Just DON’T BLAME IT ON THE BOOGIE!

The Boy Who Cried Wolf at Bristol Old Vic