We pass through the door of the Tobacco Factory Theatre’s auditorium to a sign that reads, “Warning, this production contains lot of hay”.   Actually, 84 bales of hay, according to Paul Davies, the director of Volcano’s touring Alice in Wonderland.  Hhmm, a set made entirely of hay (so much so that I can still feel my nose tickle)?  Our interest is raised and so are our eyebrows when we find ourselves sitting next to cast member, Jenny Runacre, asleep under a book, hugging the bundle of hay on her lap, which turns out to be Dinah the Cat.

“… and what is the use of a book without pictures or conversations?” she muses, yawning, passing her cat to a member of the audience, before clambering over those in the seats in front of us.

So, this is Alice?

Well, yes.  Yes it is but so are the other four women who appear on stage, hidden until now behind the ubiquitous hay, a face here, an arm there.  All the Alices use their own unique set of movements, jerking, crawling, legs sprawling – a glimpse of, a nod towards, other characters in Lewis Carroll’s classic story.

This version of Alice in Wonderland is a gloriously riotous affair.  There is no sweet girl in a pinafore dress but there are women in back-to-front braces.  It takes me half an hour to realise that Alice, all of her/them, wears her trousers inside out, another half an hour to notice that her top is the same.

This Alice tells the story of Woman.  Woman and dreaming.  I asked Mark how it worked for a man, “It takes a strong man to be comfortable watching that,” he replied (and yes, he was, by the way).  The whole play is crazy mad but there is a particularly manic, inspired scene, set to Talking Heads’ “Road to Nowhere,” when we are taken through the stages of a woman’s lot, each Alice representing a phase in her life: baby; adolescent; young woman; mother, old age and death.

It is impossible to choose a stand-out performance amongst these five actors.  We agreed that, of all of them, Ashleigh Packham did something for us; though it’s hard to pinpoint what – her beauty, sex, talent, promise?  Holly Rivers’ head movements are unnerving and well-timed, being accentuated by her white Mohican, which sometimes you see, while at others it seems to disappear, blending into the hay set.  And Holly’s rendition of Jefferson Airplane’s “White Rabbit” is worth hearing.  Why have I never before listened closely to the lyrics of that song?  Reaya Sealey reminded me of a Charlie Brooker character, menacing yet gentle.  She has a dancer’s soul, for sure.  Mairi Phillip’s plays an excellent drunk Queen of Hearts and Scottish Nationalist, a real heart and soul performer.  And, my, that woman is strong!  Jenny Runacre adds maturity of years and experience, so essential to the success of the play that I wonder how it would have worked without her.   Jenny’s yogic headstand as the Caterpillar is applause worthy and she manages to maintain dialogue in this pose for a few minutes.

In fact, physicality is the name of the game as far as Volcano’s Alice goes!   The actors sweat, pant, run, laugh, crawl over the audience (literally), throwing it sweets. They play wind instruments, dance, chat, scream, confer, cry.  They introduce us to the White Rabbit, the Mad Hatter, the Duchess, Dormouse, Flowers, Gardeners, Packs of Cards, Mad March Hare, Baby as Pig – all of Carroll’s characters are here.  We witness the Tumble, the Caucus Race, the Executions, the crazy, crazy Tea Party, The Trial – a much-loved tale interpreted so as to make you spin out.  But it’s all here.  And more.

As we left the Tobacco Factory, I felt sorry that the (maybe bemused?) smaller-than-it-should be audience gave our Alices a warm and friendly but reserved applause.  Now I wish that I’d jumped up on stage to hug them, shouting as loudly as I could, “You are wonderful.  We are all wonderful!” 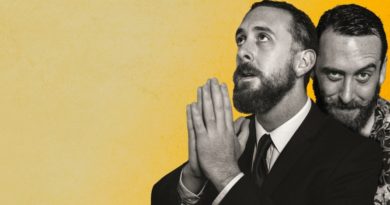 Tartuffe at the Tobacco Factory Theatre 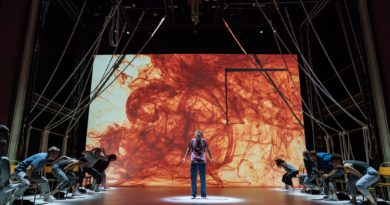 One thought on “Alice in Wonderland at Tobacco Factory Theatre”