Beautiful is a so-called ‘Juke Box’ Musical that tells the story of the prolific and legendary song-writer and performer Carole King. Her catalogue of 500+ songs includes some of the world’s best known and loved recordings from numerous male and female artists.

Spanning a pivotal period of her life that started when she sold her first song at age 16 and culminated in her sell-out appearance at Carnegie Hall in 1971, we learned how this amazing woman developed from precocious teen to one of the world’s most successful professional songwriters.

The show is peppered with both the toe tapping and heartfelt songs she penned with her husband and song-writing partner Gerry Goffin. Married at 17, their relationship was tumultuous and the songs they produced, both together and apart, reflected this.

Daisy Wood-Davis plays Carole. Best known for her role in Hollyoaks, viewers may not have appreciated this talented actor’s exceptional singing voice and musical talent. The challenge of playing a character from giddy 16 year old through to 30 year old divorcee and single mother is quite a feat and Daisy is believable through every step of the journey. The songs she sings along the way illustrate this journey well –  from the girlish rendition of Will You Still Love Me Tomorrow through the moving One Fine Day to the powerful and womanly (You Make Me Feel Like) a Natural Woman –  the final song to be recorded on her most acclaimed album, Tapestry.

The ensemble cast are excellent and play a huge variety of musical roles between them, playing the Shirelles, Drifters, Righteous Brothers, Little Eva and Neil Sedaka to name just a few. The singing is flawless and the dancing is sharp. People who like the music of this era will love this show – the crowd around me certainly did. When it came to the finale we were all up on our feet, singing and feeling the earth move under our feet just as Carole described it! Would I recommend this show to a friend? You bet I would!

Image by Helen Maybanks, with thanks

The Heresy of Love at Bristol Old Vic 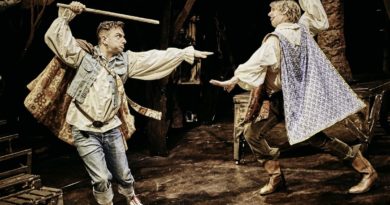