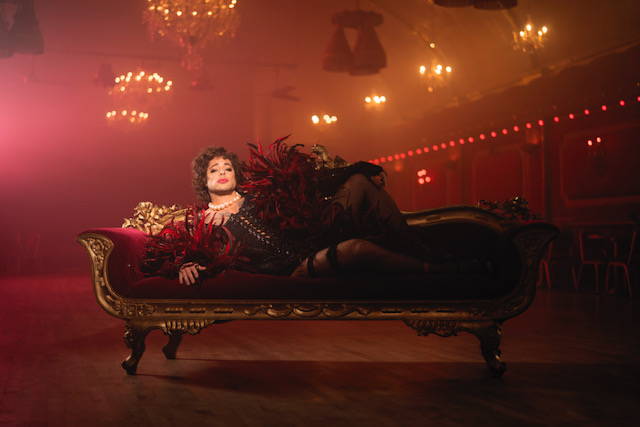 My biggest regret so far this month is that I didn’t dress up for The Rocky Horror Show at The Bristol Hippodrome last night. Not that everyone did but the third of the people who were in costume looked ace. We chatted to a Rocky devotee during the interval, who had travelled from Birmingham for the night and tottered down from the Bristol Ibis in full drag, looking divine. He said he’d been coming to see the the show at least twice per tour since its 20th anniversary in 1993 – that’s some commitment. But it’s easy to see how this show grabs you and refuses to let go.

Rocky Horror is a something of an institution, one full of sex, flamboyance and delicious lines. And the Bristol Hipp audience is well up for it, participating with gusto, complimenting the on-stage antics brilliantly; their expected, playful heckles are handled with professionalism and a whole lot of fun by our narrator, Dom Joly. Joly throws in some up to date references and is clearly having a great time. What a way to earn your money!

Camp is the name of the game and is encapsulated by our mad transvestite scientist, Frank n Furter. Handsome, muscular Duncan James of Blue (boy band) and much telly fame fuses masculinity and kookiness to deliver a throughly entertaining Frank. We love him and show our appreciation with endless applause and laughter. His corruption of the virginal Janet Weiss (slut!) and Brad Majors (arsehole!) is lip-smackingly naughty. Joanne Clifton takes us on her journey of discovery and defilement in the role of Janet and she is so thoroughly the right woman for the job that I have to remind myself that I’m not actually watching a young Susan Sarandon (as in the 1975 film version. But you knew that, right?). James Darch’s Brad is just as convincingly sheltered and corruptible, while his version of ‘Once in a While’ displays that this actor also has a very strong singing voice. It’s all a bit spine-tingly.

The rest of the cast bring to life those characters that many of us grew up with, Sue Blaine’s outlandish costumes and Richard O’Brien’s cult writing dovetailing so that we need no introduction to the names that many of us have known for a lifetime (or much of it) – Magenta, Riff Raff, Columbia, Eddie! All of them prancing and singing around the set with four phantoms, who inject meat to an otherwise slim cast. And, Rocky. Ah, Rocky, Frank’s experimental man! Well, let’s just say that our Brum friend, who couldn’t possibly count the times he has seen the show, told us that Callum Evans, an accomplished acrobatic gymnast, is the best Rocky he’s ever known. Evans flies, he flips, he stands on his hands. It’s enough to make you clap your hands in childish delight.

Hugh Durrant’s set marries vibrant colours with gothic and the camera reel unspooling above our actors’ head pays tribute to the Picture Show; through it we can just make out the all important band of five who supply the music, our soundtrack.

The Rocky Horror Show is silly, seductive and spendid fun. I’m tempted to raid my sexy drawer and go and see it all over again. 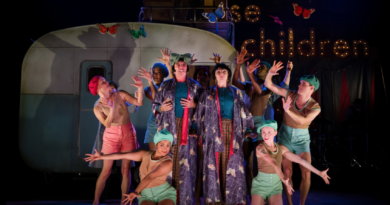