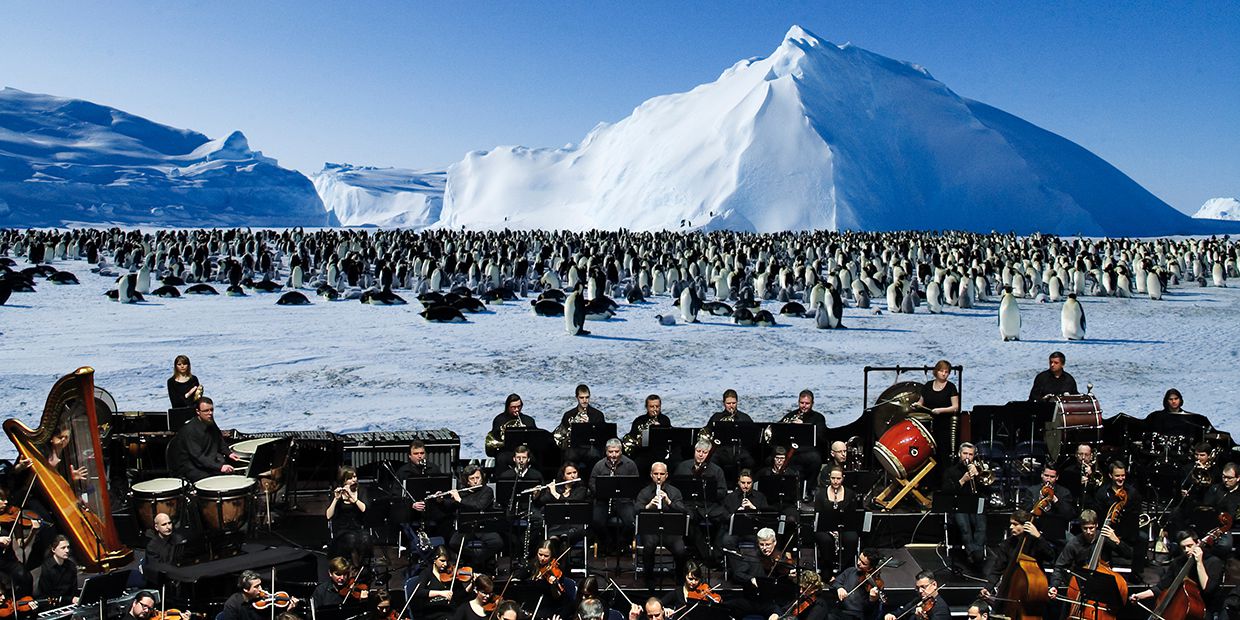 It was a diverse audience that filed into Bristol’s Colston Hall on Friday evening. For some the draw will have been the Philharmonia Orchestra, for others the promise of extracts from one of the BBC’s most popular natural history programmes. Whatever our reasons for being there, we were all in for a treat.

George Fenton is an incredibly talented and successful composer, his credits including the scores for over 100 films and many stage shows. He has collaborated with producer Alastair Fothergill since 1990 when he composed the score for the BBC’s natural history series Trials of Life, the relationship culminating in the Earth Trilogy: The Blue Planet, Planet Earth and Frozen Planet.

For this concert, which has been performed at sold-out venues around the world since its first American tour in 2010, sequences from Planet Earth, a series that took four years to make, have been remixed and are shown on a huge screen, positioned above the Philharmonia Orchestra, who Fenton conducts as they play his compositions.

The audience are taken on a whistle-stop tour of the planet, from the Sahara to Everest, via polar icecaps and the deepest caves imaginable. Each piece is introduced by George, giving us some context as well as an idea of the patience and bravery required by the filmmakers and of the technological advances that have enabled the creation of such spectacular footage. Other than that there is no narrative, the story is told by the moving images on the screen and by the music…the beautiful, beautiful music.

We see cuteness, polar bears and penguins taking their first steps and Mandarin ducks launching into their first flights; we see determination, 50,000 cranes crossing the Himalayas as they migrate 2000 miles from central Asia to their wintering grounds in India; we see tragedy, the young elephant who, lost in a sand storm, follows his mother’s footsteps in the wrong direction; we see hunters and the hunted. We see much, much more, including the snow leopard, a creature so rarely caught on camera that it’s gained an almost mythical status.

Vocalist Hayley Glennie-Smith joins the orchestra for several numbers, her voice becoming an additional instrument but one that adds a real depth and haunting beauty to the music. She also sings the one piece of music that hasn’t been composed by George Fenton, Gershwin’s Nice Work If You Can Get It, which accompanies a tribute to the teams behind the cameras, raising laughs just before the interval.

Over all too soon, the second half, which  began with time lapse footage showing the transition from season to season, ends with a piece entitled The Lucky Planet, a tribute to families that  aims to serve as a reminder that the seven million people who inhabit the earth are the species that have the power to preserve it. We’re not ready to let the orchestra go yet though and we’re rewarded for our sustained applause with a final treat, a sequence from Frozen Planet with plenty of animal antics to ensure we all left the auditorium with smiles on our faces.

The Bristol International Classical Season 2015/16 has plenty more treats in store including concerts delivered by Oslo Philharmonic and Bournemouth Symphony Orchestra as well as The Planets, performed by the Royal Philharmonic Orchestra alongside stunning HD visuals created by Duncan Copp. For further information visit www.colstonhall.org