I first watched Avenue Q at the Theatre Royal in Bath in 2011 and have since seen it twice more, including once at Bristol Hippodrome, so it’s fair to say that I knew what to expect last night. Those seeing the show for the first time though will find it a musical theatre experience like no other…a notice outside the auditorium warning of swearing and some puppet sex perhaps giving them an indication of what’s to come.

With its set depicting a row of houses in one of New York’s poorer districts, Avenue Q looks quite a lot like Sesame Street (although not as much so in this production, which has been designed by Richard Evans, as it seemed to when I watched it before). The feeling is reinforced when the combined cast of humans and puppets take to the stage and when screens positioned above the stage show short cartoon clips (I particularly liked “Five Nightstands” “One Nightstand” “One Night Stand”). But Avenue Q is a far more adult environment than Sesame Street ever was.

The residents of Avenue Q are a group of 20 to 30 somethings; some of them are human and others are people of fur (monsters). Each one is convinced that, for various reasons, their lives suck more than anyone else’s.  The newest kid on the block is Princeton, fresh out of university and unsure what he can do with a BA in English; after losing his new job before he even gets to start he decides that he needs to find his purpose in life. The story follows the group of neighbours as they encounter many of life’s more complex issues including love, relationships and what it’s like to feel a bit different.

However many times I see it, I will always consider Avenue Q to be a very clever show, one that requires a huge amount of skill from its cast.  The actors animating and voicing the puppets are always visible but interact so naturally with each other, and with the human characters in the cast, that after a few minutes each controller and puppet merges into one character.  Even though the controllers all control more than one puppet, and often voice one puppet while moving another, it somehow doesn’t get confusing.  Richard Lowe, playing both Princeton and Rod, and Sarah Harlington, as Kate Monster and Lucy the Slut, were particularly impressive, their characterisation for each role spot on and their facial expressions often mirroring those of their puppets.

The show contains a host of catchy tunes, written by Robert Lopez and Jeff Marx and played by a live band. Songs such as If You Were Gay and Everyone’s A Little Bit Racist deal with quite serious issues while raising a laugh, often making you think “oh my goodness, that is so true”. It’s hard to pick a favourite, but if pushed, maybe I’d choose There’s a Fine, Fine Line, sung by Kate Monster and lending a note of poignancy to the end of Act One. That said, my earworm since leaving the theatre last night has been Schadenfreude, which is German for “happiness at the misfortune of others”.

The show ends the Avenue Q residents find out that it feels good to help other people and that whatever you are going through in life, it’s only For Now, even Donald Trump.

I was a little worried prior to last night that perhaps four was one time too many to see the same show, but there’s been quite a gap since my last Avenue Q experience and it definitely still holds the same appeal. It made me smile and laugh, and I would quite happily go back to see it again.

For further details, including performance times and ticket prices, and to book online, please visit www.atgtickets.com

Please note that the recommended minimum age for Avenue Q is 14+. Further guidance can be found at www.avenuequk.co.uk

The Absence of War at Bristol Old Vic 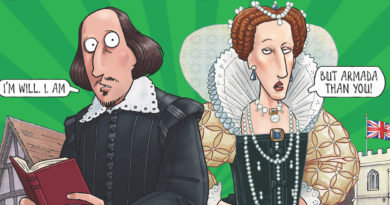 More of the Best of Barmy Britain. Horrible Histories at The Playhouse, Weston