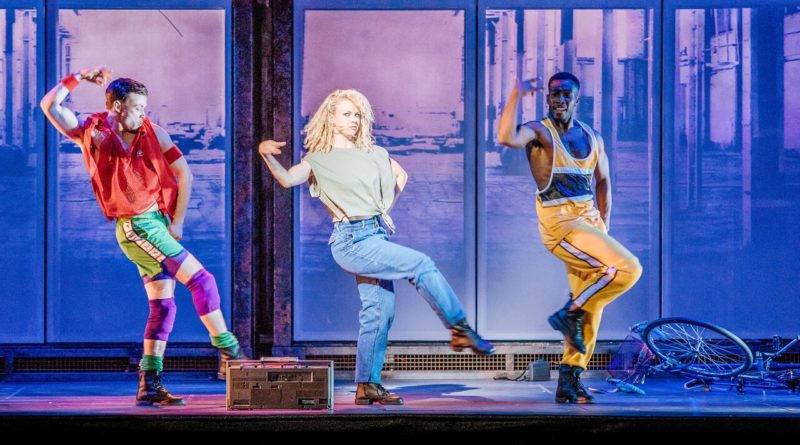 Given that I was 14 year’s old when the surprise multi-million dollar hit film Flashdance was released in 1983, it may seem odd that I’ve never actually seen it. Watching it never felt particularly necessary because the videos to “What a Feeling’ and ‘Maniac’ pretty much let us know what the film was about in an age when MTV was the babe of the pop industry and visuals had become as (or more) important as the sounds. The sight of Jennifer Beals as tough, pretty factory worker, Alex Owens, kicking, spinning and punching her way through her dance-school audition is almost iconic to many of us who grew up in the ’80s.

My daughter and I were looking forward to Sellador’s production of the musical based on the film. For her, a whole load of music and dance and for me, a nostalgic trip to my teenage years through a show with high-intensity pop, I imagined, with a set and cast full of joy and sparkle.

But there is little sense of nostalgia here, more a dated piece that needs a dollop of passion and connection. Part of the problem may lay with the soundtrack – four of the songs are familiar to me, more than familiar; I know every word, but the newer numbers built around them especially for the musical are lacklustre – sure they help to tell the story but not in an upbeat way. Even Laura Brannigan’s excellent, heartbreaking ‘Gloria’ is allowed no oomph – it’s a song that should leave me with goosebumps (as the original does, every time) rather than flat. This isn’t to take anything away from the performers – voices are good – it’s just that this production doesn’t inspire them to really let loose. The same goes for the dancing: there isn’t enough – sure, there’s lots of movement but, until the finale, which is great fun, the artists aren’t given a chance to show flair.

The script is dull and produces no real laughs. Again, it tells a story that is easy to follow. The exotic dancers are anything but exotic and what might have been risqué back then, when Madonna was still years away from unveiling her pink cone bra or making love to a black Jesus and Beyonce hadn’t even been potty trained, is extremely tame as we approach the third decade of the Twenty-First Century. Turning Flashdance into a musical for modern-day audiences must have been tricky and I’m not sure what the answer is, though more glamour and pizzazz would be a good start.

‘Strictly’ champion Joanne Clifton as a blonde, white-skinned Alex Owens dances well when given the chance and ‘Celebrity Big Brother’ finalist and A1 band member, Ben Adams, as Alex’s love interest, Nick Hurley, hits all the right notes but this isn’t enough to redeem.

My daughter enjoyed the show as did many among the audience and their appreciation was nice, if perplexing, to see. But the 1980s were huge in every way. That decade was brash, it was violent, it was loud. Big personalities, sound, colour. Flashdance isn’t any of that.

See what else is on at Bristol Hippodrome here

The Very Thought of You at Brewery Theatre

Curried Goat and Fishfingers/Check the Label at Bristol Old Vic