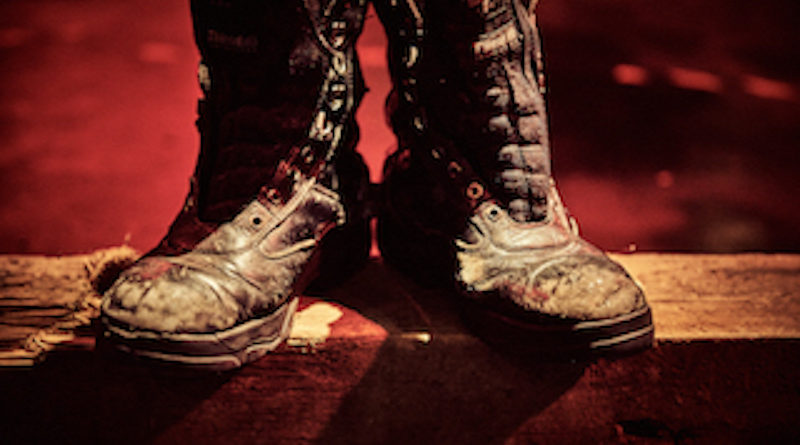 This is my first visit to see a production Waiting for Godot so I was interested in how good Samuel Beckett’s iconic play in which ‘nothing happens’ could possibly be.

Mark Rosenblatt directs Tobacco Factory Theatres’ first major solo production and opts to set it ‘in the round’. Designer Janet Bird has created a junkyard-inspired set of bricks, drainpipe and a tree made of metal. Light hangs in caged shades, framing the stage. It is here we meet Estragon (Colin Connor) and Vladimir (David Fielder), two dirty men living on the street; Vladimir, affectionately known as Didi, looking distinctly 1970’s ‘tramp’ – you know when homeless people were seen as ‘characters’ rather than as a nuisance – while Estragon, aka Gogo, sports an acid house smiley face T-shirt, giving him an air of someone belonging to a more recent era. The age old friends are waiting for Godot, whoever that is, hoping that he’ll offer them something, well, better …

But by the tree they return to every day, they only encounter an emissary of the elusive Godot – the Boy – and Pozzo (John Stahl), master to Chris’s Bianchi’s slave Lucky. Gogo barely remembers any of it and appears to be stuck in a carousel of dementia and denial, Connor doing a good turn in being at once distraught and confused and I fancy I can feel his feet aching and bloody from boots too small.

In this extremely famous play about friendship, filling time and waiting for a hopeless situation to turn around, the friends support each other and contemplate whether separation or even death might be the best option for them. Bim Mason from Bristol’s Circomedia is the clowning director of this production so expect slapstick and standard clown antics. In fact, Fielder’s Didi looks every inch the clown, from his hat to his exaggerated expressions, and he probably has the edge over the rest of the cast, though Bianchi’s constant raspy breathing is an impressively constant sound track and his forlorn look is heartbreaking. Stahl’s reminds me of Brian Blessed in his Shakespearian command of the stage, managing to be both camp and butch all at once.

I have nothing to compare this to but the performance has me wishing for Rik Mayall and Ade Edmonson in the roles of Estragon and Vladimir, in their Bottomesque glory. As the rest of the audience laughs, I struggle to raise a smile. It’s not that I don’t get it because there really seems nothing much to get. Maybe that’s the point?

Launch of Snow White and The Seven Dwarves at The Playhouse, Weston