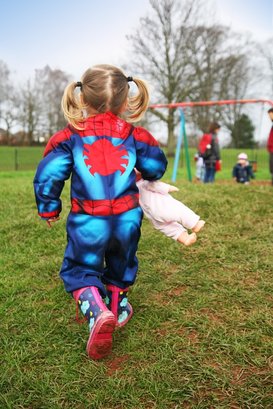 I was delighted to be offered this gig because I’m super-interested in gender and particularly its impact on children. Can’t Sit Still’s multi-sensory, interactive show at Circomedia is even aimed at the age range both of mine fit into, so Hetty (6) and Robin (3) helped me write this.

We are sat on pink and blue cushions on the floor in the beautiful Circomedia building on Portland Square waiting for the show to start. When it does, shrieks of delight and infectious giggles erupt from the audience, as a huge box in the middle of our rough circle begins to move about and start talking.

Out of this box emerges a girl (we know she’s a girl because she’s wearing a pink dress) and a boy (no doubt about this person’s gender as they’re wearing blue trousers). The laughter continues as the characters fool around in a confidant acrobatic slapstick routine, which children and adults alike enjoy. Our friend T (6) amuses us by attempting to blow one of the performers over whilst they’re in a handstand.

This is a very interactive show and the children are encouraged to get involved at several points, though it isn’t always totally clear when they are welcome to join in. At the first of these they are invited to play with gendered toys kept in the not so subtly symbolic pink and blue boxes. Much to my annoyance, my children totally conform to gender stereotypes, with Hetty grabbing the ironing board and Robin making a beeline for the tool kit. I’m pleased to see that plenty of others weren’t so embarrassing to their feminist parents. (Must try harder!)

There were several demonstrations of gender non-conformity throughout the show, including an action man in a dress, a dinosaur baby and a boy fairy. Most important for us personally was for Hetty, my little aspiring acrobat, to see a woman/girl character basing (being the weight-bearing partner in the acrobatic team).

There is a beautifully gentle atmosphere to the whole show, which the gorgeous live music makes a huge contribution to. It’s also very funny. Both my children love it. Robin would like more time to play with the toys and Hetty asks for the chance to try some acrobatics. Another young audience-member repeatedly exclaims wow! throughout the performance.

Plink/Boo takes us on a journey that starts at a place where girls and boys are put into discrete, rigid boxes and ends at a place somewhere not of complete freedom but certainly not where we began. I like that its message is relatively subtle and therefore hopefully more accessible but I would like to see a little less of the elements that reinforce the gender roles. This entrancing, hilarious and thought-provoking show is a work in progress though, so watch this space!

Find out more about Can’t Sit Still on their website