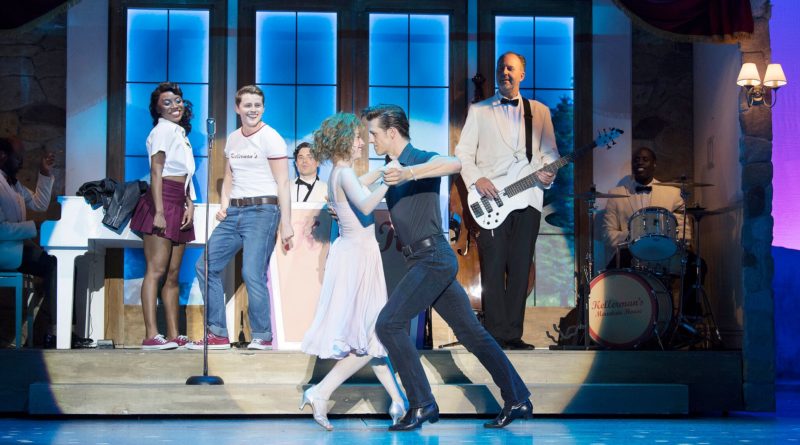 I had a brief moment of coolness when I was at secondary school. I remember it well, as I was never one of the popular kids, so anything resembling coolness was memorable and noteworthy for me! It was my 13th birthday, and I had a group of friends round for a birthday tea and to watch a film. I had chosen Dirty Dancing, knowing full well it was a ’15’ certificate and my parents were likely to deny my request. Somehow (I think they never noticed the rating) they let me, and I was revered amongst my peers for getting us all the chance to watch a nearly adult film. With ‘that’ scene in it, which was somewhat uncomfortable to watch with my parents, despite it briefly upping my coolness rating for a week or two! Yeah, Dirty Dancing was a seminal film for me; gave me hope as the geeky girl got the amazing guy and is loaded in nostalgia. Needless to say, I was excited about seeing the stage version of Dirty Dancing at The Bristol Hippodrome, albeit with a little bit of apprehension as I was really hoping that it didn’t stray too far from the silver screen version. If you don’t know the plot (and if you don’t, where have you been?) then we join the Houseman family in the Summer of 1963 as they come to Kellerman’s resort for their annual family vacation. Baby is the apple of her fathers eye and all set to join the Peace Corps. She is also certain that she will ‘never love as man as much as she loves her daddy’. She wasn’t banking on her world colliding with handsome dance teacher Johnny Castle though, and her personal ‘summer of love’ rebellion threatens to tear her family apart.

The first thing to say about this staging of the classic film (which, incidentally celebrates the 30th anniversary of release in October and makes me feel very old) is that it stays remarkably close to the original film and rarely strays from the plot, look or feel. The casting is absolutely superb. Katie Eccles takes on the role of Frances ‘Baby’ Houseman with such an uncanny likeness to the role originally taken by Jennifer Grey that you often forget that it is not her playing the role. The character of Johnny Castle was one of the late Patrick Swayze’s most iconic roles, and difficult shoes to fill. Lewis Griffiths managed to slip into this role with ease, and predictably had many female theatre goers getting audibly hot under the collar as he hip gyrated his way through the show. Carlie Milner played a splendid Penny, with faultless and exquisite dance moves that were beautiful to watch, and the legs of an absolute gazelle! Lizzie Ottley was a great comic character in the role of Baby’s sister Lisa, but I did feel that perhaps the direction for her to ham this part up quite as much as she did let her down a little, and that the role would have been so much better if it has been just a tiny bit more understated.

Dirty Dancing did not let me down for one second. It remained absolutely true to the film and much of the dialogue was lifted word for word from the film script. The dance numbers were suitably spectacular and the whole thing made me smile from start to finish, as I was able to revel in the nostalgia seeing as the production team were wise enough to understand exactly what their audience would want. None of us were coming for highbrow theatre; we were coming to be entertained and uplifted. Yes its pretty cheesy and there is no need to think too deeply about any of this, but that’s perfectly fine. The audience clearly loved it. Myself and my lovely friend who is also a big fan of the film had a good old giggle and a brilliant girls night out, I’ve had the soundtrack in my head all day and I’ve been smiling about it ever since. The show is as good looking as its cast, it makes you feel good, you know exactly what you are in store for early on and above anything else it is lots and lots of fun.

What more could want from a theatre show that brings this iconic bit of cinema history to life?