I haven’t been to a proper Panto since I was a little girl. Up until now, my girl has been too little to enjoy it really, but at the grand old age of four, I thought it was time to introduce her to this theatrical institution. But, I can’t say I was really looking forward to it. I was slightly the worse for wear after my own Christmas celebration the night before, and was preparing to endure it for the sake of her. We took our seats to the sound of festive music, and I heard her whisper to her friend “I’m having a brilliant time already!”  I couldn’t wait to see her face when the show actually began.

The show opened with a dazzling dance routine, exactly what was to be expected considering Jack was played by George Sampson. You know, that lad that won ‘Britain’s Got Talent’? I must admit, I was expecting great dancing, but I was a little worried that was all he would be able to do. I needn’t have worried. That boy can sing and act too, and his comic timing wasn’t half bad either. He was a very likable and engaging Jack, and this may well be one of the few Panto’s where there seemed to be just as many teenage girls screaming in adoration as there were young kids and their grown ups!

Weston Panto and Weston-super-Mum favourite Terry Gleed played an excellent Simple Simon. He was a truly scrumptious comic character, often making us laugh just by pulling a face. And there were plenty of other comic characters for him to bounce off. Jolyon Dixon played the dame to perfection, with a series of increasingly ridiculous and hilarious costume changes, and enough double entendres to keep the adults giggling too. For me, the stand out character was the King played by Keith Simmons and admirably supported by Ben Simmons as Lord Chamberlain. This father and son duo also directed this wonderful production. Perfect comic timing, a dry wit, and the escapology scene had us all in stitches. The evil Fleshcreep played by Gareth Davies was just scary enough to have my girl grab my arm every time he appeared, but not scary enough that there were any tears. Cara Dudgeon was a sweet voiced and light footed Princess Amelia. The stand out voice though went to Ruth Berkeley as Fairy Organic, a really high quality performer.

The whole show had quite a contemporary feel with up to date music and a great supporting cast for the dance routines, yet it didn’t lose sight of all the necessary ingredients that make up a perfect Panto. There were plenty of “He’s behind you!” and “Oh yes he is!” moments to make it truly authentic. Brilliant set, polished dance routines, moments of perfect comedy, we both got swept up by its exuberance.

My girl giggled, danced, sang and shouted along with the best of them. We BOTH thoroughly enjoyed it. It is a long show – about 2 and a half hours including the interval – but she was delighted by it all and the time flew by. I’m certainly going to be taking her again next year, we just hope the standard is as high as this one. I’m a convert to the camp, glitzy, silly world of Panto. Oh no I’m not! Oh yes I AM!

Jack and the Beanstalk is running at The Playhouse, Weston until 5th January 2014 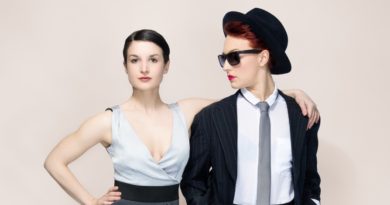 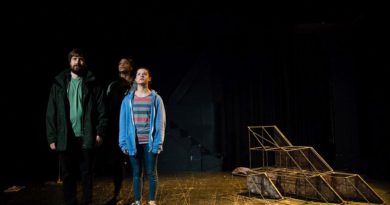 The Long Trick at The Wardrobe Theatre