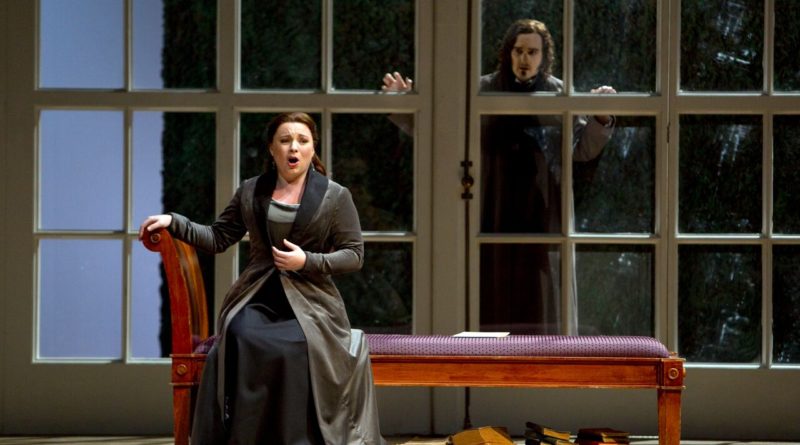 The Welsh National Opera comes to The Bristol Hippodrome a couple of times a year, each time performing three shows in a week. This means that this week I’m going to two operas in three nights, a thought that would have struck horror into my heart just a couple of years ago.

My last experience of opera was a springtime WNO production and in all honesty if it had been the first one I’d ever seen I’d have probably decided opera wasn’t for me. It wasn’t bad – not at all – it was just what a friend of mine described as a ‘more difficult’ opera.

Luckily it wasn’t the first I’d seen, and last nights Eugene Onegin was wonderfully accessible to an opera novice. It was sung in the original Russian but with the acting and the translation helpfully projected on a screen above the stage it was easy to follow what was going on.

Eugene Onegin is quite frankly a bit of a knob. He turns up at his friend’s country estate with a big city attitude and a young girl thinks she loves him after meeting him once, sending him a love letter that receives a horrendously condescending and patronising response. He then turns up at a local ball, again all attitude and superiority and pisses his best friend off by being all over his fiancee, then winding things up still further to the point where they end up having a duel. Obviously Onegin isn’t the sort to back down or to deliberately misfire, so he kills his friend and then disappears in a cloud of self-pity. Finally he returns all drooping ‘woe is me, I have no job and no hobbies and only my large country estate and loads of money’ and meets the young girl again only now she’s a high society wife at which point the insufferable git decides that maybe she is worthy of his attentions and starts demanding that she leave her husband or he’ll follow her around weeping and wailing for the rest of her life. She gives him the boot and he once again melts into a self-obsessed quivering wreck of misery. Reading the synopsis I suspect the original idea was that we found him a bit of a sympathetic character, but as the rather splendid woman next to me declared as the curtain went down ‘Serves him right!’.

It was great! There was a lot of singing and melodrama, some nice outfits and scenery and the chorus doing fantastic singing and dancing scenes. I loved the set, which was very minimalist. The angled white wall with a large square cut into it that comprised most of the set framed glimpses into lots of different scenes – a late summer garden, a grey winters day, a rainy night, the inside of a young girls bedroom. The lighting set the atmosphere perfectly, particularly with the different weather conditions.

The costumes were also beautifully done, with some of the dresses in the provincial ball (which looked a lot more fun than the high society one) being particular favourites. I don’t need to tell you that the voices were all stunning, and the effect when more than one voice combined sent shivers down my spine: I’d expect nothing less from the WNO.

This was actually the first opera I’ve attended on my own as my planned companion was taken ill. I was a little uncomfortable with that, especially as it was a very long – 3.5 hours including two intervals – production. It was fine: I was completely absorbed by the show anyway and people around me were friendly. I also ended up sat next to a magnificent lady with a posh accent and furs who was a real opera aficionado, and was also on her own. She was lovely and not in the slightest condescending or patronising but ready to share her enthusiasm and knowledge. In fact, up to now, this is pretty much the impression I get of opera types – friendly and wanting you to join the club.

Opera’s a funny thing. So many people – myself included a couple of years ago – see it as a homogeneous mass, all the same elitist nonsense with hardly any melodies and only for the pretentious. I have no doubt that there is plenty out there that fits that description. However, quite apart from the lighter stuff that WNO does like ‘Kiss Me Kate’, there is a huge range of different styles and stories. I am glad that I wasn’t put off by my last experience because I feel that I am just at the start of a journey which is going to lead me to find lots of things I really love. I’ve even been known to put opera on the TV now.

Tonight I will be going to see WNO performing Die Fledermaus, which is described as ‘a magnificent masquerade ball … a hilarious story of mistaken identity full of splendour, posh frocks and masks… featuring some of the most irresistible melodies ever written for the stage.’ I can’t wait.

See what else is coming up at Bristol Hippodrome

The Two Character Play at the Alma Theatre