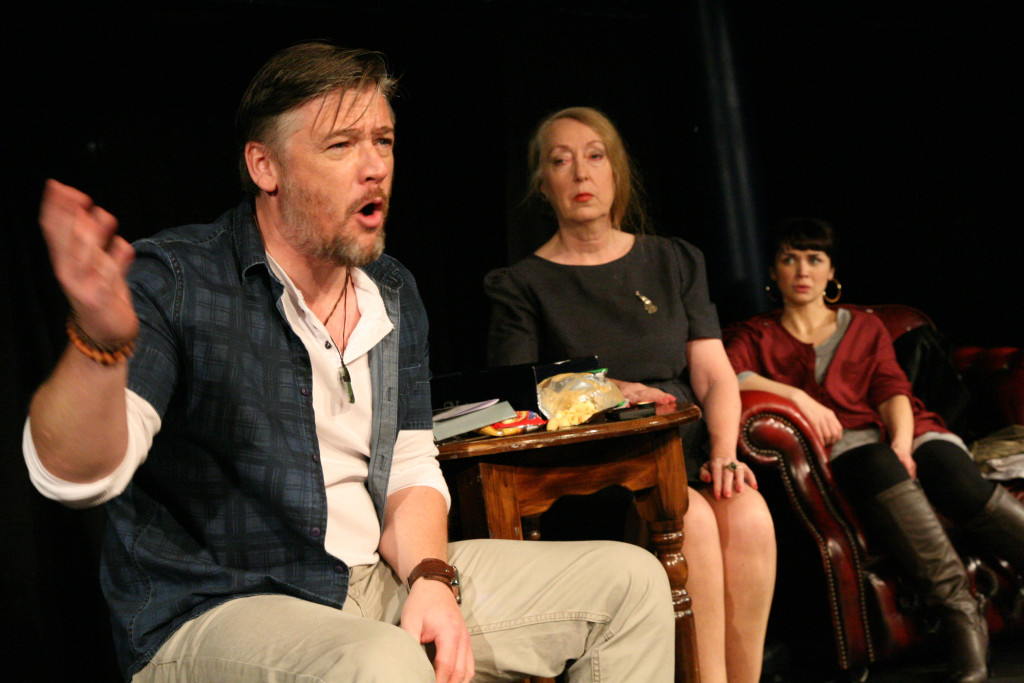 Last night I watched Happy Hour at the Brewery Theatre, a show that only half-filled the theatre which is a real shame. This was part of the ‘A Play, a Pie and a Pint’ series, which showcases new writing. The pie (Pieminister) and pint (Bath Gem) are worth a mention as both were as lovely as you would expect.

Happy Hour is a sweary, shouty family reunion at a time of stress. A pub landlord has died, and his two children and widow are meeting for the first time since his death with the aim of disposing of his ashes. The whole of the short (50 minute) play is set in a private room of the pub, shown with a very simple set of a table and chairs and an armchair. And, of course, a shoebox full of ashes.

Hannah Donaldson makes an entrance as the extremely highly strung and unlikeable Kay, with some enthusiastic swearing from the very start. Her mother, played by Anne Lacey follows soon after. She was perfect in the role of the pub landlady; although we never saw her with punters, it was very easy to imagine her behind the bar giving any troublemakers an earful. The cast was completed with Stephen McCole as Tom, ably acted but in a more difficult role than the two women in some ways as he came across as the good one, always less interesting than the flawed characters. The mother in particular at first seems to be pleasant enough, a little downtrodden by her despicable daughter maybe but it becomes apparent that she is in fact controlling and domineering and in light of this Kay’s behaviour may be more understandable if still unlikeable.

The play has a fairly straightforward plot; the family have got together to scatter the dead man’s ashes in the pub (I think I missed something about exactly where they were to be put but it may have never been made quite clear). However old grudges are present, bad behaviour has occurred and they all have scores to settle. A wedding that the sister and mother have no idea about to a woman on the other side of the world, a new business that turns out to be one in a series of businesses and bankruptcies, promises made and withdrawn, a missed funeral, money owed, favoured children, an overly clinging mother, siblings competing for parental attention – all of it comes out. There are some lovely barbed comments, some sublime nastiness, lots of creative swearing and some moments which lead to horrified indrawn breaths followed by nervous laughter.

There were also a few elements which felt a little cliched; the alternative therapist who bought her qualifications from Groupon and the good son who escaped by going to save lives in Africa, presumably as a doctor for example. This didn’t take away my enjoyment of the play at all. The quality of the acting was great, and I came away thinking ‘Thank goodness my family don’t act like that or have all that baggage’ and then realising I have no idea what is yet to come out of the woodwork!

Happy Hour is on at the Tobacco Factory Theatres until 21 November, and I would recommend popping in to see it, definitely with the pie and pint option beforehand.