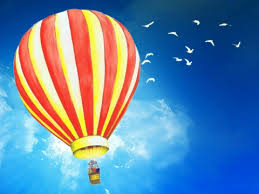 I’ve never been up in a hot air balloon but, after having watched the performances given by the cast of Myrtle Theatre Company at Tobacco Factory Theatre on Saturday afternoon, I have a clearer vision of how it must feel, taste, look.

The Tobacco Factory has been transformed into the Bristol International Balloon Fiesta at Ashton Court (the real-life fiesta begins this week; Myrtle Theatre’s run in Bedminster ties in very neatly here) and it has a real festival-like atmosphere, right down to the fun-fair ticket booth, from where the play’s lighting and sound is controlled. A sea of asphalt is our green, green grass; miniature Bristol houses, created, I am told, by the team at our beloved Aardman Animations, are used to imaginative effect to show the city below and, every now and then, the ensemble drag in huge baskets to make this play very real indeed.

Hot Air is recommended for age 12+. After consulting with some of the Company at their excellent TF+ acting workshop event earlier in the week, it was felt that, yes, my 7 year old would be able to handle the 2 hours of words, songs, dance and fun. She did – some bonus that she had already met 5 members of Myrtle, 4 of whom were on stage for this performance. More than that, she was greeted at the auditorium entrance by her first name.

Sure, there is the odd “swear word” and she didn’t understand all of the dialogue but she stayed the pace and, like all of us, she loved Michelle’s Gaskell’s use of movement in the beginning of the second half, when the actors delight the audience by displaying enough emotion to make more than a few tears prickle.

Most of the actors take on multiple roles and the arena/stage is endlessly busy but never confusing, not once. So many characters, so convincingly portrayed that, you know, I’ve met every single one of them somewhere along this journey of life. ALL of the performances are spot on but my special mention goes to Jack Riddiford in his professional stage debut – you may struggle meet two characters as different as Sean the Chav and Jasper the Toff (I know who I’d rather spend my time with).

Take a trip to the Tobacco Factory this week for many, many reasons. You’ll come away feeling lighter than air. I promise. Just lovely.