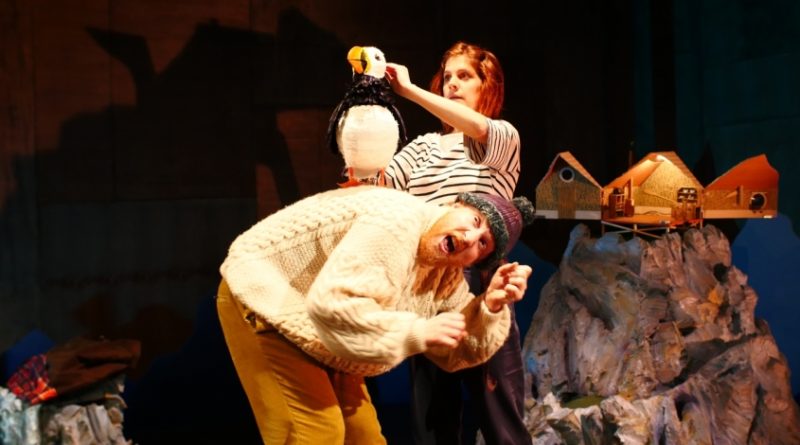 Review Theatre
31/05/201710/06/2017 Karen Blake 0 Comments
I was a little worried about taking my eleven year old son to see Much Ado About Puffin at the Tobacco Factory Theatre because I thought it might be a little young for him. I was expecting an ‘I’m bored’ or two during the show at least, and for the first twenty minutes or so I was watching him covertly, seeing how he wasn’t chuckling when the younger children in the audience did and assuming he wasn’t engaging. I was wrong. I had no such worries about the four year old girl, she’s loved every show she’s ever seen and this charming little story of a man living on a lonely island who gets befriended by a puffin was always going to be a winner. From the start she was asking whispered questions – ‘Is that a rock or an iceberg?’, ‘Why is it so dark?’, ‘Is the puffin hiding behind that rock?’, and giggling away at the funny bits.
Music was an integral part of the story, and I noticed that a little hand was often tapping along next to me. It’s a very simple tale, told partly using puppets and partly by acting. The main character lives in a hut on top of one cold and windy island, and every day gets in his boat and goes to another cold, rocky island to do some unspecified task with a mysterious instrument (I assumed he was a scientist taking readings: my son thought it might be an oil rig). At night he dances on his own and listens to the radio. Then a puffin steals his pencil and from there insinuates itself into his life until the friendship is sealed with good deeds and affection on each side. My son said it reminded him of Mr Bean, and I could see what he meant in that the acted parts of the story were told in physical actions accompanied by (mostly) non-verbal vocalisations with a lot of humour. It was a much gentler thing though, we liked this man who appeared to be kind and gentle as well as isolated and maybe lonely. Puppets were the real stars of this, with what my daughter calls the ‘little’ man showing us the journeys between the islands and the enormity of the world the man was living in, and the ‘little’ puffin flying around his house and the islands. The ‘big’ man acted alongside the ‘big’ puffin puppet who was a great character.
Open Attic have done a great job with this show, it kept all three of us enthralled and involved enough to be genuinely upset at part of it. We left smiling, both children said they loved it, and as far as I’m concerned anything that is suitable for both a 4 year old girl and an 11 year old boy and also enjoyed by their mother is a win – there’s not many things that we can say that about!
Review by Ginny Gould

Death and Treason, Rhyme and Reason at Bristol Old Vic