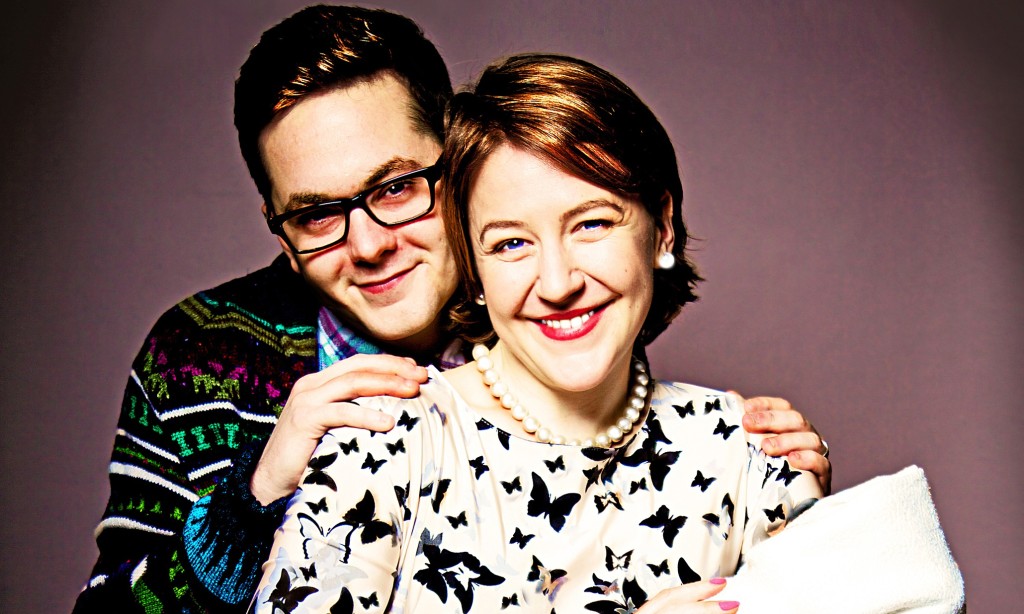 ‘Radiant Vermin’ is the latest offering from writer Philip Ridley, creator of the critically acclaimed ‘Dark Vanilla Jungle’, which was performed at The Brewery Theatre this time last year. My friend watched that show and said it was dark and powerful. Radiant Vermin is billed as being a wickedly comic satire. I was very much looking forward to the performance ahead of me last night.

I smiled as I took my seat in the packed Brewery Theatre auditorium. Madonna’s ‘Material Girl’ was playing, followed by ‘Our House’ by Madness. The atmosphere felt playful. I sensed the show might be a little racy, it certainly sounded interesting. The staging was intriguing. A large white stage floor, backed by four large, white canvas stretchers to suggest a room. I’m right in the middle of preparing for a show of my own art work, so blank canvasses fill me with a little bit of distress in my current mood. Little did I know quite how much distress I would be in by the end of it all…

Ollie and Jill ( played by Sean Michael Verey and Gemma Whelan) want to tell you about their dream home. Its clear they are not proud of the things they did to get their dream home, but they want you to know they did it all for their baby. For his future. But just how far did they go, are they prepared to go, to get everything they have ever wanted?

At first, I thought I would relate to our young couple. I am a mum of two small children. Creating a stable world for them is important to me. There are plenty of things I would probably do to give them the things they need, actions that might not seem palatable to others, if I really had to. So I thought as the play went on I could forgive them, whatever it was they had done. As it turns out, I couldn’t have felt less empathy, less connection with two characters who should have had my sympathy. I’m actually struggling to think of any characters who have felt quite so repugnant to me. Perhaps that is because I never saw it coming. On first meeting with Ollie and Jill, they seem unremarkable. Normal. The sort of people you could easily dismiss, but that you would also probably quite like. You might have ended up being friends with them, but would probably always feel that there was something missing from the friendship that you couldn’t quite put your finger on. But they are ‘nice’, so you wouldn’t question it too much. The fact that these ‘nice’, normal people become so repellent, so vile, so disgusting in their depravity just to possess ‘things’ is testament to both the writing and the acting.

The acting? Yes, Sean Michael Verey and Gemma Whelan should be applauded. I am assuming we were meant to hate the characters, to feel no empathy with them. (That is my hope, anyway.) If the audience were meant to come away troubled and questioning, then they did their job in spades. There was a particular scene that will stay with me, where our leading man and lady bring a whole raft of equally repellent, materialistic neighbours to life in a frantic, energetic scene that left me reeling with its speed and ferocity. Perhaps the scene went on too long, it certainly had me wishing for it to end. I sensed Ollie was clinging on to his carefully crafted mask of normality, and was struggling to justify how far he had gone. I felt his panic, and felt my own rise as his did. It was all I could do not to yell “SHUT UP!” at the top of my lungs in that packed theatre, just to make them both stop their tirade. As I left the theatre, I saw myself in a mirror and realised my chest and neck was covered in a heat rash. I wasn’t hot, I think it was the sheer force of the emotions I felt that were coming out in a physical reaction. In a compliment to Gemma Whelan, I learnt that she is a character in the popular TV drama series ‘Game of Thrones’. I’ve never watched it, but after seeing her performance I am curious to see her in another guise, so I might just give it a go.

The play was a study of our modern society and its fixation and obsession with consumption, our never satiated need to buy bigger, better, more expensive, more luxurious things; to have more and be better than our neighbours and friends. My problem with the play was not so much the writing or the acting (which, as I have said was excellent) but was more that I felt there was a general assumption from the writer that this is how we ALL feel. We all feel a need to fill our vacuous lives with ‘stuff’ to feel better. I can’t (and have never) been able to understand this. How can someone get so passionate and animated about a luxury kitchen? About a home that always looks beautiful? Sure, I want my family to live in a secure, homely, comfortable environment. But this play made me feel glad for the setting of my own moral compass. It might sound like I hated this play, and I suppose I did. But not for the writing, the fine acting and the interesting if a little far fetched storyline. These were all commendable, although a criticism would be that I felt it would have been much a more rounded and interesting piece if the crime the couple had committed had been somehow more subtle, more insidious, somethings more of us could ACTUALLY imagine doing. No, I hated it as it made me feel sick to my stomach about the emphasis much of society places on consumption. My flesh crawled at the mere thought that nice, normal people would stoop so low just to have ‘nice’ things. Maybe other audience members felt differently. Maybe they felt a certain amount of sympathy for the pressure this young family were under, to secure their future, to have all the good things they mistakenly believed would bring happiness. I certainly did not. ‘Radiant Vermin’ made me grateful for my messy home which I never have the time to ‘renovate’ as its just not that important to me. Grateful for some of the friendships and relationships I have nurtured, particularly since I have had my children. I’ve met some of the most important people of my life, made connections based on mutual like, love, interests and a similar outlook on the important things in life. Not a love of or comparison of all the stuff we have accumulated.

OK. I’ve decided, I’m going to give away most of my worldly possessions, keep what is important and take my little family off to go live a travelling life in a van. Who is with me?!

Radiant Vermin is on at The Brewery Theatre until Saturday 7th March. Its not an easy watch, but it will certainly get you thinking. 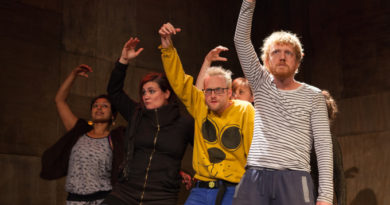 Beyond the Ridiculous at The Wardrobe Theatre