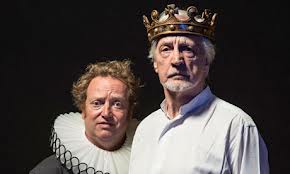 “I have a feeling that my review is going to be a little rambling and incoherent”, I said to my companion as we left the theatre. And starting a review with that sentence, you would be forgiven for thinking that I’m about to slate “My Perfect Mind”, this theatre production from the company ‘Told by an idiot’, which is also a ‘Young Vic’ and ‘Theatre Royal Plymouth’ co-production. Far from it, I thought it was a brilliantly crafted piece of theatre, and I have a feeling that it was meant to be somewhat rambling in places to illustrate the torment and confusion of Edward Petherbridge, playing himself in this semi-autobiographical tale.

‘My Perfect Mind’ tells the story of Petheridge as he rehearses for the role of King Lear over in New Zealand. A major stroke leaves him unable to play the great King, but then, the role gets played out anyway as he manages to retain the entire text of Lear in his mind. This all sounds like it should be tragic and melancholic, doesn’t it? Far from it, there was humour mixed in with the pathos throughout. Some of the dialogue was laugh out loud stuff. Petherbridge plays the aging ‘luvvie’ actor so perfectly that I was left wondering how much of it was acting. However, credit goes to Paul Hunter who plays all the other characters with fine comic timing and moments of Monty Python silliness, despite some rather (intentionally?) dubious accents! Hunter slips with ease in and out of the different characters he plays, of which there were many, both male and female. The fact that he made for a very unconvincing woman added to the comedy. The whole performance jumps from past to present in a manner that can at times feel discordant and confusing. But, this really did feel key to the whole show. I really felt the fear, confusion and despair that one might feel had they been robbed of their chance of glory by such a debilitating illness. One and a half hours with no interval absolutely flew by, and this was down to the sheer energy of the performance and the fact that both actors were engaging, wonderful as a partnership and full of humour. Although the tale WAS difficult to watch and keep up with that doesn’t mean it wasn’t slick, interesting and it certainly drew me in, making me laugh and feel melancholy in equal measure.

As a Shakespeare novice, I do feel that my enjoyment of the play would have been enhanced had I been more familiar with ‘King Lear’. Despite this, Petheridges monologues from the play were wonderful to watch and you felt you were in the company of a fine and noble actor. Confusing at times? Yes. Rambling and abstract? Well, yes, that too. A good night at the theatre? Certainly. And there were a few scenes that had the abstract painter in me shivering with delight, but if you want to know more about that, you will just have to go and see it, won’t you?

“My Perfect Mind” is on at the Tobacco Factory Theatre until the 4th of October. 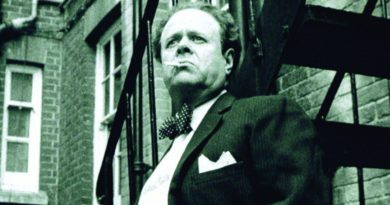 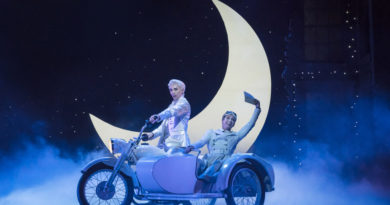 One thought on “‘My Perfect Mind’ at Tobacco Factory Theatre”