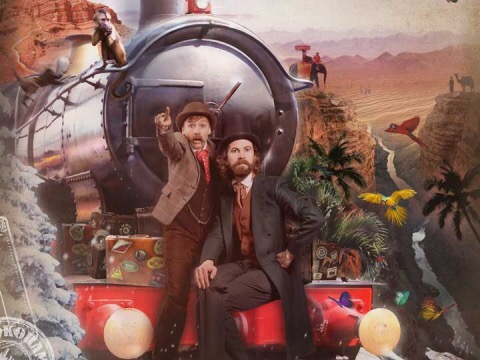 At Christmas 2012, my daughter and I were lucky enough not only to see New International Encounter (NIE) perform Hansel and Gretel in the round at the Tobacco Factory Theatre but to spend an afternoon at their open rehearsals before the show proper. In this way, we were able to gain an insight into the intricacies of the seemingly effortless entertainment on offer – getting those laughs necessitates excellent comedic timing and floating in an out of character, scene or musical instrument takes practice.

Although, of course, they couldn’t possibly remember us as individuals, on seeing NIE again we felt the excitement akin to visiting distant cousins who we’d once met at a wedding and got on really well with but, alas, miles and circumstance had separated us for a while.

They’re back! This time with their 2015-16 tour of Around the World in 80 Days, that well known tale by Jules Vernes about the punctual-as-a-clock but possibly suspect Phileas Fogg and his gentleman’s wager to travel in an Easterly direction around the world in exactly 80 days, meeting interesting characters along the way. And ooh, it’s tense. Not as though you’d know it as our hero takes it all in his stride, a cup of tea (at 74 degrees Farenheit, no more, no less) barely leaving his hand.

As the 19th Century travelling party moves through Egypt, India, Hong Kong, Japan, USA and back to UK, they meet all manner of obstacles, some created and others overcome by Fogg’s very funny Manservant, Jean Passepartout. Six people take to the stage, though at times it feels like more because two actors expertly morph into quite a few characters each, donning accents to suit the country travelled. And then, every member of the cast is master of an instrument (some play many), so this really is a musical delight, the audience never really knowing when they’re going to burst into song. It’s an endearing device through which to tell Verne’s story.

The programme for Around the World in 80 Days makes no mention of which actor plays which role and, though I could google them to find out, I refrain from doing so, feeling that this omission is deliberate and highlights the fact that each performer is as important as the next, every one being crucial to the whole. From Phileas Fogg’s stiff upper British lip to Passepartout heroic dedication to his master, from the daring rescue of Princess Aouda to the working together with Inspector (Mr) Fix of Scotland Yard , this is a story of friendship and love told in the most entertaining of ways.

Set in the 1860s, this version of Verne’s classic has been adapted to tickle the audience of 2015, with references to austerity and British trains. The use of props is inventive: a wooden partitioned wall acts as a train or any number of backdrops, boxes and cast members transform into a very necessary elephant and simple branches of leaves cause a riot of giggles in the jungle scene.
It’s all quite lovely and perfectly suited to family viewing. So, it’s a real shame that this couldn’t have been schedule to run in a couple of weeks time, when the kids are off school for the summer.

Those of you who are able to keep them awake a little later on a school night, however, will be very pleased you made the effort: Tobacco Factory Theatres and New International Encounter are a match made in theatrical Heaven. 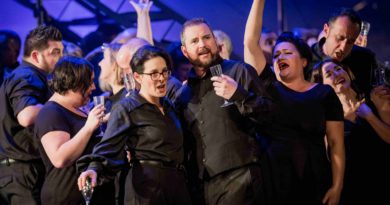