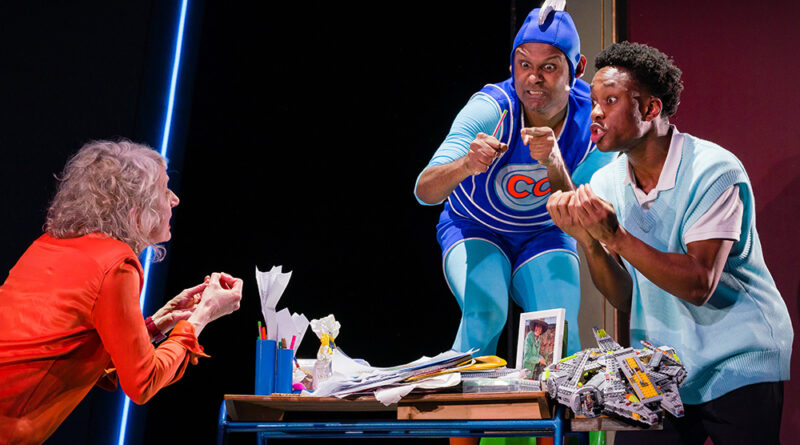 Sometimes live theatre will absolutely leave you speechless, or it can make you laugh and very occasionally it can make you cry. The show Wonder Boy does all three of these things and it does it effortlessly. It has been a long time since I have seen a piece of theatre this powerful, this moving and so well performed. If I had the chance, I would see this again and again. Sadly, I shall have to make do with a single night.

So, what makes this show so great? It is quite simple, the writing is beautiful, with superbly clever word play, which does seem like something of a paradox given that this play is about an inability to communicate. The cast made up of mainly young actors work together remarkably well and the lead actor, Raphel Famotibe is just beautiful, his delivery is word perfect, which given he’s required to stammer, means he plays the role of Sonny with integrity and empathy.

Sonny is a young boy of twelve, he lives in a foster home after the suicide of his mother and has developed a stammer that renders him mute, while inside he screams to be heard. His coping method is to create a character in the style of a super hero, who speaks for him through signing. However, as the story develops we start to wonder if his dependence on his hero is entirely healthy.

Sonny’s friend Roshi, played to perfection by the fabulous Juliet Agnes is the sort of best friend we have all wanted. She is hugely funny, superbly clever and she has dreams of being successful. However, she too has a communication difficulty, in that she is never heard by those in authority. She has got into trouble one time too many and so the senior Learning Team have written her off as a trouble maker.

The head teacher, played by an effervescent Jenny Fitzpatrick is the epitome of every bad school manager I have ever met or worked with, she cares not about the individual children, but rather the statistics and reports. The school is clearly in special measures and it is her job to get the figures up and impress the standards assessors. In doing so, she completely misses the resourcefulness of teaching staff and the emotional needs of the underprivileged students in her care.

Luckily for Sonny, he develops a relationship with his drama teacher Mrs Wainwright. She teaches Sonny how to live with his communication difficulty and in doing so, opens up to him in a respectful and honest way that quite frankly moved me to tears a couple of times during the show.

For those of you who are not fans of Star Wars or have never watched the movies, you may have missed a couple of the in jokes that included remarks about Sonny’s favourite of the films and a model of the Millennium Falcon spaceship on Mrs Wainwright’s desk. This was because Mrs Wainwright was played by the utterly adorable Amanda Lawrence, better known to us Star Wars fans as Commander D’Acy, Princess Leia’s right hand woman in the Resistance, in both the eighth and ninth films of the saga. She was also the one character cut from the final moments of the final final film when it was released in countries that have laws making homosexuality illegal, because, as in the play tonight, Comander D’Acy is married to another woman and the film showed her embracing and then kissing her wife.

Throughout tonight’s play, Sonny was seen to have various conversations with the memory of his dead mother (also played beautifully by Jenny Fitzpatrick in her second role) and these were truly heart breaking. There was one moment when Sonny stood up, his face wet with genuine tears and the audience was utterly silent, hanging on his every movement before he even spoke. This moment of silence felt like an awakening, there was a force present in the room as he stood on the stage with the valour and integrity of a knight, winning his battle with himself as he began to release the guilt he felt over the death of his mother. It was a thoroughly beautiful moment and both my companion and I were left with tears in our eyes.

I am glad that I went to see this show, but not for the reasons you may think. For me, it was a recognition of what teaching staff who care about the children in their care have to face as more and more bureaucratic procedure is brought in to replace actual teaching time. I have worked in schools and I have seen first hand the teachers who are able to connect with the children, be broken and spat out by the machine that modern education has become. I saw in the show’s head teacher, every bad decision and cruel thoughtless moment I have witnessed in poor school managers.

There were parts of this show tonight that felt like moments of PTSD from my teacher training degree and I left the theatre fighting back my own grief at what teaching has become. Those friends I have who are still in teaching are working between sixty and ninety hours a week, only to have more useless forms and Government sanctioned paperwork shoved into their working day.

This play was about grief, loss, empowerment and the failure to listen and support children in school. When children with recognised learning difficulties are struggling to get the support they need, the education system has failed. Thus this piece was as political as it was emotional. This powerful, beautiful, tragedy of modern life deserves our attention and it should be viewed as a powerful critique of what front line teachers and the children in their care are facing under the recent past and current political regime.

Can I hand on heart tell you that this play is worth seeing? Absolutely. Do I think that the messages are powerful? Yes I do. Was it also great fun with some beautifully written comedic moments? Yes it was. With live music and some of the best stage craft I have seen, this show is fantastic. The stage itself was fabulous with clever use of technology to aid the story telling. Also, and this is no small thing for a person with a sensory impairment, having a signer and subtitles projected on to the wall was a revelation.

There are simply so many good things to say about this show that I think you really should go and see it for yourself. This comes with a small caveat, be prepared to cover your eyes and ears for very short periods if you are sensitive to strobe lighting and sudden loud noise. This was the only difficulty I had with the show and each time, it was for just a few seconds and did not damage my appreciation of what I was seeing, hearing or feeling.

For further information about Wonder Boy, and to book tickets, click HERE. 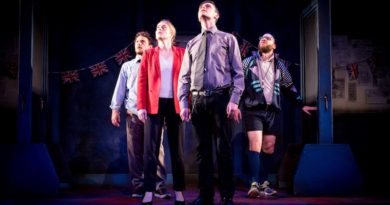