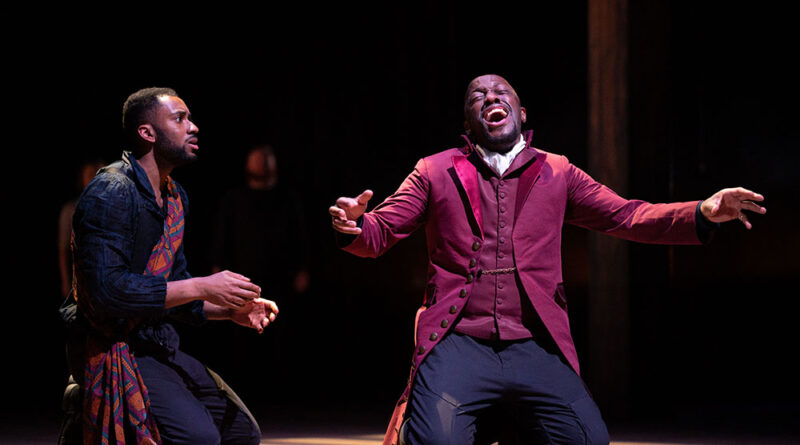 Karen Blake reviews The Meaning of Zong, playing at Bristol Old Vic until 9 April and then from 26 April to 7 May.

That was the number I woke up still repeating in my head this morning, after my visit to the Bristol Old Vic last night to see The Meaning of Zong, a play based on real events from 1780’s, written by Giles Terera, who co-directs with Artistic director Tom Morris. Terera also plays the role of Olaudah Equiano.

132 was the number of enslaved Africans onboard the slave trading ship Zong who were massacred as they were thrown overboard when navigational errors led the ship to go off course. As the ship ran out of water, the crew realised that they could make a claim on their insurance for the slaves to cover their ‘losses’. Initially the insurers refused to pay out for the claim, but a resulting court case found that it was legal and that insurers must pay for those that had died.

Early in the show we are introduced to Olaudah Equiano. Equiano was kidnapped and forced into slavery at 11 years of age but managed to work his way out and became a free man. He then went on to be the leading black campaigner for the abolition of the transatlantic slave trade. He brings the massacre to the attention of campaigner Granville Sharp (played by Paul Higgins) and the play follows their efforts to bring the events to the wider public which eventually led to the abolitionist movement and the end of British involvement in the African slave trade.

An important and memorable aspect of the play is the music weaved into the fabric of the performance. Composer and musical director Sidiki Dembele performs the music live throughout the show as part of the cast, and it is impossible not to get carried along by the rhythms and music, which resonate so strongly with the sense of place created. The music and use of traditional West African instruments adds a richness to the storytelling, and Dembele brings the audience along from the start by encouraging us to join in with clapping and repeating his rhythms.

My companion noted that the first half of the show was very dialogue heavy which was occasionally a little harder to follow. For me, this made the second part of the show all the more powerful though. The visual imagery and more visceral sense of the spirit of survival is beautifully represented by Kiera Lester who plays the one female survivor of the massacre. She managed to save herself from drowning by clinging onto the ship, and it is played in a way that really demonstrated a strong instinct for survival.

The staging of the show is also brilliantly yet simply done, with planks of wood from the ship also morphing into shelves of a bookshop and the fireplace in Granville’s lodgings, and the mast and rigging of the slave ship morphing into the high Cathedral ceilings where the court cases were heard. I very much enjoyed these elements of the show, as it really brought the scenes and places represented to life.

This play is important, and even though it was originally performed as a radio play in 2020 because of the inability to stage it, still feels really timely now it has finally reached the Bristol Old Vic stage. I’m left with the uncomfortable feeling that it isn’t right I hadn’t heard of this terrible yet pivotal moment in my country’s history, as I was taught nothing about the slave trade and Britain’s part in it at school. Giles Terera speaks in the programme about the importance of ‘finding a way to tell this story so that the audience could listen to it, hear it, see it, without fear’.

This is certainly the most successful element of the performance for me and Terera has succeeded in removing the fear; it is hard to watch but made me feel part of the conversation, such an important conversation we need to stop avoiding if we are to move forward. I’ve already talked about the play with my children when they asked me what I went to see last night. I’m determined they won’t be ignorant of this period of history in the way I was, so that it doesn’t become invisible to them, and we can all continue to move forward together.

This show is part of the ‘Love Your Local Theatre’ initiative, and two for one tickets can be purchased. When buying a ticket for The Meaning of Zong for a performance in April, you get another ticket completely for free, courtesy of the National Lottery. Simply input the promotional code LYLT22 when making your purchase to activate this offer.

William Tell at The Bristol Hippodrome