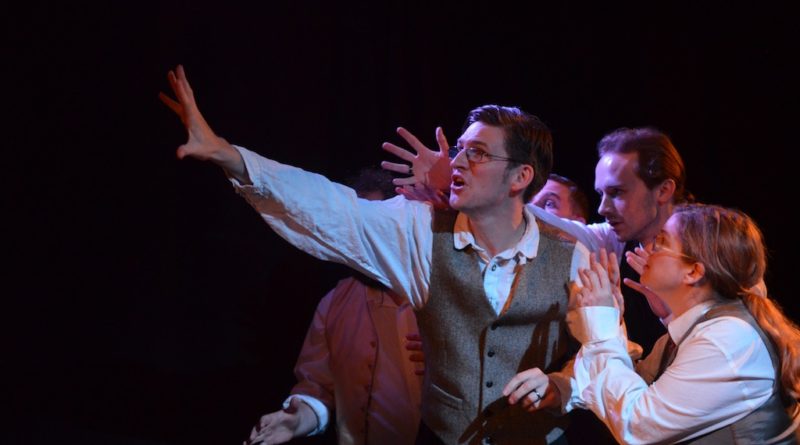 Inspired by the horror fiction of US writer, H. P. Lovecraft, Bristol-based The Unnamed bring Shadows over Improv to the perfectly cast Anglican Chapel at Bristol’s beautiful Victorian Arnos Vale Cemetery. The Unnamed’s selling point is that their brand of improvised theatre is non-comedic and the only chuckles from the audience come when words fail them, which happens so rarely you barely notice it.

Five actors spin out a tale of intrigue and spookiness from one single word, suggested by an audience member – in this case, the word ‘web’, a little too ‘on subject’ for my liking but I should’ve shouted out ‘Bazooka’ or ‘totalitarianism’ while I had the chance. I didn’t because not being able to think on my feet is one of my weakest traits, the old brain just doesn’t work that fast, which is one of the reasons that this troupe of four men and one woman so impressed me.

I’m not sure that the story on offer, a tale of Edward’s unwanted inheritance of his wealthy uncle’s library and the terrible caveats ingrained in his bequeathal, stayed true to the original word but any horror story is a web of sorts, an entanglement of feelings and thoughts, an entwining of circumstances that spiral out of control. I understood that the first, say, two minutes, was improvised but the quality of the performance for the next 72 minutes or so belied the fact that these young performances had no script or even general direction (apart from the genre). Their ability to work as a team and to make up such an easy to follow, interesting story on the spot is testament to their imagination and adaptability.

The lighting adds to the eeriness in this Grade 2 listed building – red and blues and, periodically, the total absence of light, plunging us into uncertain darkness, graves, tombs, decayed bodies almost within reach as we sit, shoulder to shoulder, with around fifty strangers. The cast carry torches, thus projecting shadows on the walls, bending into the curves of the Chapel, shadows that grow and shrink with every tiny movement.

The Unnamed definitely have an edge, the improvisers being skilled in what they do. Shadows over Improv certainly has me wanting to experience more and, hell, I might even find my way into one of Bristol Improv Theatre’s workshops, see if I can learn how to speed up that grey matter.

For more information on The Unnamed, see their website.

Who is Dory Previn at Brewery Theatre