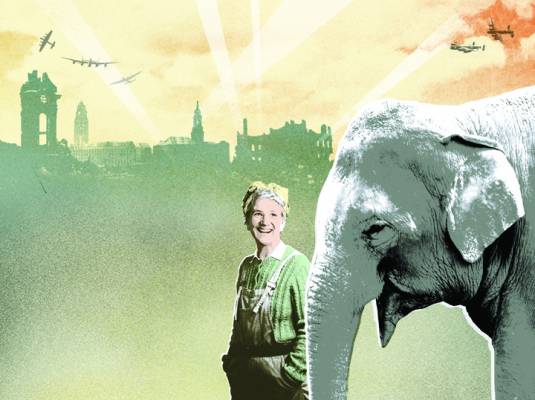 We follow the A370 to South Bristol, accompanied by shards of every colour streaking the evening sky, booms aplenty, and we bump into the odd patch of smoky air. It’s Bonfire Night and the soundtrack gifted to me by my 8-year old is, inevitably, Katy Perry’s ‘Firework.’ All the bloody way, from Weston to Southville!!

Relieved to get out of the car, I take her hand and we head to Brewery Theatre for tonight’s performance of Poonamallee Productions’ An Elephant in the Garden, a story of the last days of the Second World War, told from a German girl’s perspective.

Reading the programme, I tell her that this is another monologue; there’s just one actress on stage, Alison Reid.

But, I remind her, we very much enjoyed Private Peaceful and Toro! Toro!, other one-actor shows we’ve seen at Tobacco Factory Theatres this year, both also involving war (and, the latter, an animal), both also written by Michael Murpurgo and both also adapted by Simon Reade. Surely, here, with An Elephant in the Garden, we are in the safest of hands.

It’s 1989 and the Berlin Wall is being demolished; 60 year old Lizzie is there and, in a blink, she takes us back to her childhood. Born in 1929, she never expected war. But it came. Lizzie’s narrative really picks up pace on her sixteenth birthday, that day in February 1945, when her home town of Dresden was all but annihilated by British and American bombers, killing around 25,000 of its inhabitants. Lizzie and her mother escape the unbearable destruction, with Marlene the elephant in tow.  Saved by Lizzie’s mother, who works at Dresden Zoo, Marlene becomes a symbol of strength, otherness and hope.

As with all solo performances, Alison Reid has a large script to memorise. And this, she does. I am able to follow her performance easily and become glued to this rather beautiful story. I’m a little concerned about my companion, however: does she understand this? She doesn’t yet know a great deal about the Second World War (‘Is it set in Poland?” before the showing) and the pace is fast, the changes in character not always obvious.  But she stays mostly quiet, concentrating, asking a few questions along the way: “Is that War?”; “Is he American?” “Where’s the elephant?”

Reid gives a good performance and we like Lizzie, we want her to flourish and be happy. Maybe more could be made of Marlene though – more shadows? Louder footsteps? Or perhaps it’s not necessary; my daughter could picture her well enough, could see her surroundings (she imagined her in the barn of the farm we go to often, she tells me).

Matthew Graham’s lighting certainly helps the story along – the string of flashing lights to illustrate the rudeness of bombs is particularly effective – and Jason Barnes’ sound works really well in places, though the reality of all those Bonfire Night fireworks popping and bursting in the city around us seems the real stroke of unintended and uncontrollable genius.

The recommended age for An Elephant in the Garden is 8+, though, once again, I might put this a little higher. It would do wonderfully for anyone who has a basic knowledge of the Second World War and wants to explore it further. This is a well-produced piece of entertainment, with a captivating storyline and the message that, regardless of where we live and which ‘side we’re on’, we’re all fundamentally the same. We just want to live. And love.

An Elephant in the Garden most definitely fired up my daughter’s imagination and our return journey was highly interesting. Being late, I switched the car dial to Radio 3 and the next half hour became an unleashing of her inner mind, interpreting the music we were listening to, fitting it to the story unravelling as I drove. We turned it off, at last, as the composition was making her “too sad.” A little post-theatre research tells me that we had heard Polish Composer Panufnik, who fled Warsaw just before the uprising there in 1944. What we had experienced, according to the BBC, was music that ‘conjures up a “boundless landscape which evokes melancholy”. How apt!

The Amazing Bubble Man Review at The Tobacco Factory 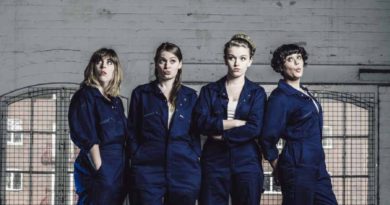