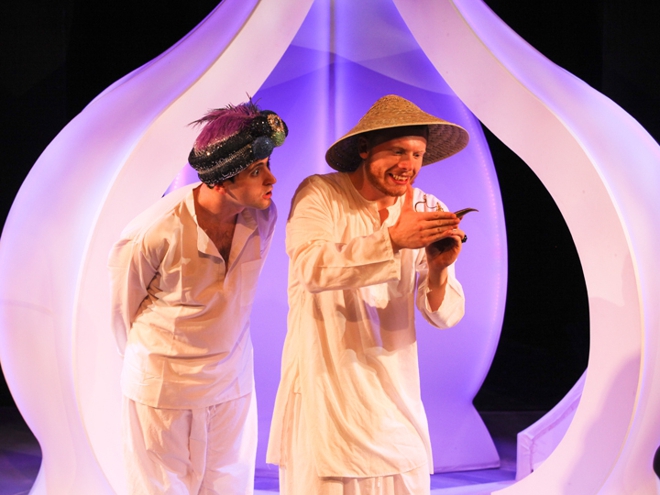 “Was it a mistake to bring the iPad today?” I think, as she sits in Mark’s Bread below Southville’s Brewery Theatre, making a list of all the buildings she’s spotted on the journey, plotting how she can fit them into her new Minecraft world, taking note of where a skyscraper might be best placed.

We’ve arrived at North Street early, partly by design, partly due to the rigidity of the WsM-Bristol train time table. This is always a bonus, as it means that we can take time in this lively, friendly bakery and have some tea and cake, while we watch the busy bakers through the window, revealing mouth-watering smells as they open ovens, uncovering fine-looking pastries and bread. She polishes off her Mendip Moments ice-cream (this place keeps it local) and declares, “A theatre! My world needs a theatre!”

And, really, what would life be like for us without the theatre? Particularly one that brings us productions like Story Pocket Theatre’s Arabian Nights, a show that really fires the imagination in all of us.

Luke Pitman is the actor on stage, watching the audience stream in to take their seats. He smiles and then begins to interact with us so that we are wrapped up fully in the show before it even starts (don’t get there late if you embarrass easily). He introduces himself as the storyteller.

There are 3 actors in this version of Arabian Nights and, let me tell you, they are all excellent storytellers. And, anyway, Arabian Nights is about storytelling, isn’t it? It is but, from the many incarnations I’ve seen in my life, not everyone is that good at interpreting Sheherazade’s 1001 tales.

But these guys are naturals, keeping the kids and adults spellbound throughout the hour-long show. As the actors morph from one character to another with ease and persuasion, it becomes clear why the printed programme does not assign each of them any one character. Sheherazade’s cunning and skill must save her life and Story Pocket Theatre has decided to concentrate on four of those stories, which the cast tell through multiple roles.

Expect fun! William Forde is hilariously Monty Pythonesque, particularly in his role as Abanazar, Aladdin’s evil ‘uncle’. At times, Luke Pitman appears to be Jim Carey doing Rik Mayall – so very expressive with a gorgeous dose of slapstick – and Yasmin Goodwin brings clarity to the show, helping to pull it all together with wit and elegance.

The set is dominated by a crown-like white structure, reminiscent of a Moorish castle, which obeys those magic words … Open Sesame … and acts as a screen for the cast, at one point transforming itself into a boat.  And there is unexpected chair puppetry in The Little Beggar, a heartwarming tale of community responsibility, or lack thereof.

Arabian Nights is fast-paced, tight and funny. It’s half term fun for the very young (there are three-year olds loving every second) to adults who seem to have come without kids!

We loved it and, after all, Minecraft is just one way to imagine a whole new world!

Arabian Nights is at Brewery Theatre until Sunday 2nd November 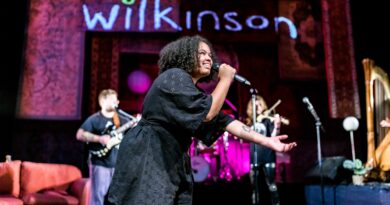 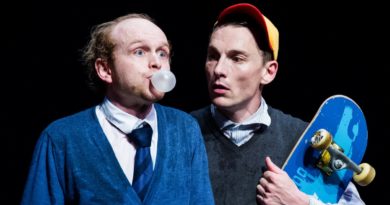