The Great Big Story Mix Up

“Are we off to see Goldilocks today Mummy, or a play about a king? Because the poster doesn’t seem to know WHAT the story is today!” said my 5 year old girl on getting to The Bristol Old Vic where we were seeing ‘The Great Big Story Mix Up‘. Truth be told, I couldn’t answer. You see, the play we are about to see has not been rehearsed, as it is up to us, the audience, to decide who the characters will be, what the props are and how the story will unfold. We are promised a mix of improvisation, songs and general silliness, which sounds alright to me.

We enter the studio performance space and are confronted by a stage that is littered in different props, with a bulging rail of different costumes. Our band of likeable actors then enter the stage and introduce themselves to the storymakers, and explain how things will work. The audience participation is immediate, with children being invited to chose cards which would determine what characters were going to be in the story. One child was put in charge of the ‘Horn of Song’, with another the ‘Horn of dance’. (If you want to know what these are, you will just have to come along and see for yourself!). My girl was thrilled to be chosen to pick a card, and even more pleased when she picked the Three Little Pigs. For one actor to play at the same time. This brought on lots of giggles on her part, which continued throughout.

The actors Robin Hemmings, Toby Hulse, Jesse Meadows and Lauren Saunders improvise their roles with wit and comic timing, often bursting into laughter as they attempt to make up rhymes that sometimes don’t quite work, are not quite able to find the right word or go off on an unexpected tangent. But it is slick enough and silly enough to please both the adults and the kids in the audience.

We can’t say what your show will be like, as no two shows can be the same. But you should try and catch it nevertheless, as it is gentle, comic, silly and lots of fun.

The great Big Story Mix Up is on until Saturday 1st November at The Bristol Old Vic. 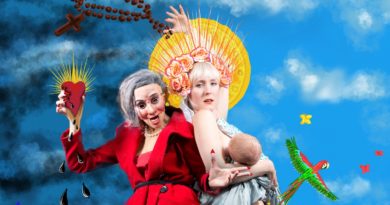 Queen Cunt at The Wardrobe Theatre 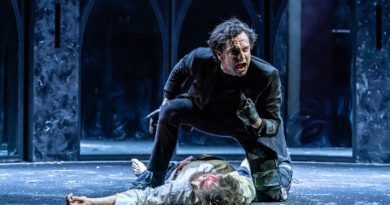