Back in the days of VHS videos, when my three children were very young, each of them had a favourite film. For the eldest, it was The Sound of Music, she’d watch and play at the same time, her dolls and teddies taking on the roles of the von Trapp children while she was, of course, Maria. The middle one’s chosen film was Toy Story, although he later became a big fan of Monsters, Inc. and to this day counts a crocheted Mike Wazowski as one of his most treasured possessions.

Where am I going with this? Well, the youngest one’s favourite, watched over and over and over again, was Bedknobs and Broomsticks – they loved the magic of it, and, I have to admit, so did I. They now live in Finland so unfortunately weren’t able to accompany me to The Bristol Hippodrome to see the stage musical, on its world premiere tour of the UK and Ireland, but I know they would have enjoyed every moment, just as I did.

This new stage musical version of Bedknobs and Broomsticks features songs by Richard M. Sherman and Robert B. Sherman, which we all remember from the film, plus new songs and additional music and lyrics by Neil Bartram. The book is by Brian Hill and the production is directed by Candice Edmunds and Jamie Harrison, with set design and illusions also by Jamie Harrison.

Based on Disney’s 1971 film and on the stories of Mary Norton, it tells the story of three orphaned children, Charlie, Carrie and Paul Rawlins, who are evacuated from wartime London to live with the Eglantine Price, a trainee witch. They join forces with her to search for a secret spell that will defeat the enemy once and for all. Armed with an enchanted bedknob, a bewitched broomstick and a magical flying bed, they journey from Portobello Road to the depths of the beautiful briny sea, encountering surprising new friendships on their way.

And what a journey it is, With so much to see in every scene, I find myself wishing I could press a pause button from time to time, partly to give myself chance to take in every detail but equally to give my emotions a brief rest. I’ve mentioned how often the film was played in my household, but I realise, while watching the play unfold, how little of the story I’ve previously taken in; among the colour, joy and magic, all of which there is in abundance, there are also some very dark moments and glimpses into the vulnerability of the characters. I hadn’t expected it to be a show that would make me think, but it really did.

We all know how much childhoods have been affected by the events of the last two years, but this is a story of three youngsters, the eldest just 13, who lose their parents in an instant and are then taken away from everyone, everything, and everywhere they know – it’s to keep them safe, but my God, how do they process that? It’s horrifying to remember that some 3.5 million children were evacuated during World War II and some would have never seen their parents or homes again… it gives me a different perspective on recent events; I’ve sometimes found it hard to count my blessings during the pandemic but it suddenly becomes easier. I want to learn more about the evacuees, they are surely a group who shouldn’t be forgotten?

Thoughts being provoked aside, this is a fabulous show. There are strong performances from all the leads, particularly Dianne Pilkington as Miss Eglantine Price and Conor O’Hara as Charlie Rawlins, the eldest of the three Rawlins children. Fresh out of drama school, this is Conor’s professional debut and I think he’s going to go far. The younger children, Carrie and Paul, played in this performance by Dexter Barry and Isabella Bucknall, are also brilliant. Over the course of the run three more pairs of children will cover these roles – Haydn Court, Sapphire Hagan, Jasper Hawes, Poppy Houghton, Evie Lightman and Aidan Oti – and I’m sure they will all be just as good. The company play rescuers, civilians, Portobello Road vendors, and fish – it’s a cast of 20 (if I only count one pair of Carries and Pauls), but seems like many more, they are busy from start to finish.

I don’t think I’ve ever seen a set quite so mobile as this one, various elements being used very effectively to show movement from place to place and time to time, and the costuming, the work of Gabriella Slade, is exquisite, particularly for the characters who appear in Portobello Road; that scene, ending Act One, being one of the standout moments for me. There’s magic, illusion, puppetry, singing, dancing, and rich orchestration, everything has been thrown at this show and you couldn’t ask for more.

Bedknobs and Broomsticks has a very short run in Bristol, with just three performances left, Friday 28 January 19:30 and Saturday 29 January 14:30 and 19:30. I do hope it comes back, as, just like the film, I think I could watch it over and over and over again! The bar for 2022 has been set very high. 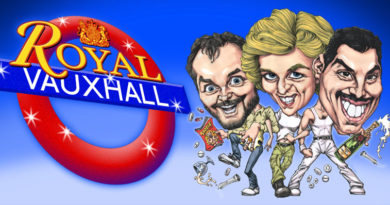 Royal Vauxhall at the Wardrobe Theatre