Sometimes in Loves Cafe, everything comes together in a certain way and it all feels a little bit magical. On Friday night, Ben Ottewell returned to Loves bringing his brilliantly distinctive vocals and blues based acoustic set to our favourite little café, and it was undoubtedly one of those nights where all the planets aligned!

Loves can’t help but be an intimate venue, and it is completely fabulous to see someone like Ben Ottewell play here. He must like the place, as he has visited and played here more times than you can count on one hand. For those that don’t know (where have you been?) Ben is better known as one of the three lead vocalists and lead guitarist of Indie rock band Gomez. He released his first solo album ‘Shapes and Shadows’ in 2011, and has been touring the UK, Australia and America in the years following. He has been to some great places, so Weston-super-Mare is lucky to play host to him.

As I arrived, the atmosphere in Loves immediately felt warm, cosy, candlelit and friendly. I was a bit jealous of the customers who were enjoying delicious tapas cooked by the fantastic chef Nick, as I had already eaten. Still, the wine is good, so I grabbed a large glass and settled down with friends to enjoy the gig.

First up was our support act for the evening, Jim Blair. 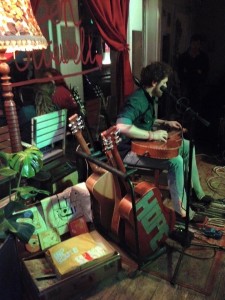 Jim plays with the band Hip Route, but that night he was performing solo, and was a fine warm up for the main man himself. Jim’s blues-y acoustic set was crowd-pleasing and he had the audience very quickly in the palm of his hand. He plays slide guitar beautifully, and his voice is rich, mature and absolutely delicious. If you get the chance to check him out, then I really think you should. Hip Route have loads of gigs coming up over the coming months, click here for more details. It just so happens that he is also a very lovely chap and a pretty good barman too, but that is another story…

When Jim’s set was over, there was a brief interlude before Ben took to the stage. 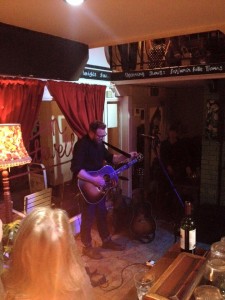 There was certainly something in the air that night. The audience all listened in rapt silence as Ben played his set. There was a mix of old and new stuff with a few Gomez tracks thrown in for good measure, and plenty of tracks from his most recent album ‘Rattlebag’. I knew a few people at the gig, but as Ben sang, there was a sense of camaraderie in the air. I felt like we were all friends sitting in someone’s front room. To reclaim a phrase that has been horribly twisted by some of my least favourite politicians, we really were ‘all in it together.’ Ben performs with such warmth and humour, and the atmosphere of the venue added to the feeling of intimacy. The tracks were thoughtful and heartfelt; his voice was commanding and soulful. It was clear that everyone in the audience loved it. The highlight for me was his rendition of Blackbird, a song I’ve heard on the speakers here often when I’ve been drinking coffee in the daytime. To hear it live was special. I knew it was for Anna the owner too by the big smile on her face, and I just wanted to hug her.

Loves café. Great music by candle light, wonderful art on the walls by Kris Evans, good wine, good looking staff, absolutely delicious tapas served to your table before the music really kicked in… what is there not to like?

In my humble opinion, Loves café is the best live music venue in Weston, Anna and her team really do it well. For a list of future gigs, check out their website here, or visit their Facebook page. Thanks Loves, we LOVE you.

The Depraved Appetite of Tarrare the Freak at Tobacco Factory Theatre 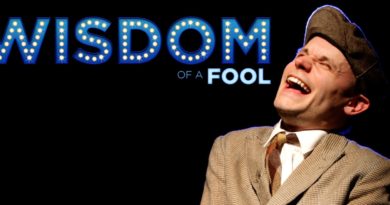 Wisdom of a Fool at Playhouse, Weston

One thought on “Ben Ottewell at Loves Cafe”