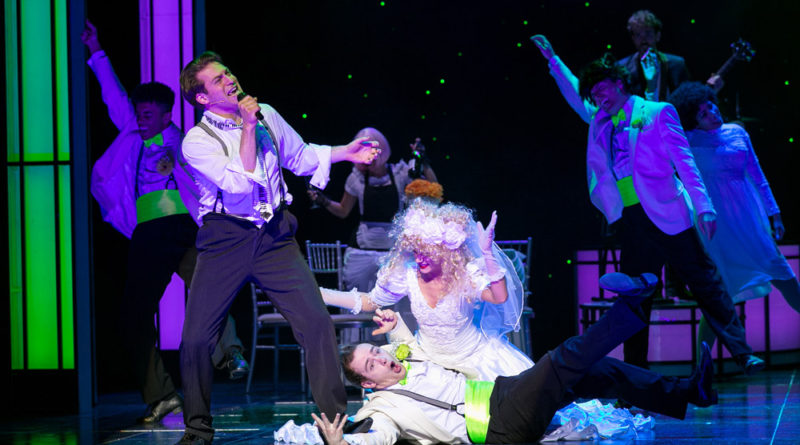 I have never seen The Wedding Singer movie starring Adam Sandler, which came out in 1998, so had no particular expectations* of the musical based on it that is currently gracing the Bristol Hippodrome stage. What I got was a night of pure feel-good fun that lifted me after a long and slightly challenging day.

Written by Chad Beguelin and Tim Herlihy (the latter also wrote the film) with direction and choreography by Nick Winston and music by Matthew Sklar, The Wedding Singer is set in the mid-80s, when hair was huge and greed was good. It tells the story of Robbie Hart, a would-be rock star and New Jersey’s favourite wedding singer. His fiancée dumps him at the altar, leaving him determined to make every wedding as miserable as his own… until he falls in love again.

Full of original music and lively dance routines, this show is full-on from the get-go, the pace not letting up for a moment throughout its two and a half hours. The cast, led by Jon Robyns in the title role, must be exhausted by the end, but I found it energising to watch and left the theatre feeling wide awake, quite unlike the state I’d arrived in.

There are several familiar names among the cast including X Factor runner up and Dancing on Ice winner Ray Quinn; Ruth Madoc (who to me, and many my age, will always be best known as Gladys Pugh from Hi-De-Hi); Roxanne Pallett, another member of the Dancing on Ice alumni, whose debut role in Emmerdale won her several award nominations; Cassie Compton, who finished fifth in the very first series of The X Factor and has many theatre and TV credits to her name; and Samuel Holmes, who was rather fantastic as Dandini in Cinderella at Bristol Hippodrome just a few months ago. They were all excellent, supported by a fabulous ensemble who didn’t get a note or step wrong.

The show looks great, interesting use of projection building the 80s feel with trailers of iconic films from the era and advertising images. It’s nostalgic but not at all dated, despite being dotted with not-too-subtle cultural references that only those who lived through the decade will get.

It sounds good too, the music played live. Perhaps some will be disappointed not to hear their favourite 80s tunes, but I loved the score, which covers almost every genre from that time from power ballads to hip hop. There are some great jukebox musicals out there, don’t get me wrong, but it’s good to hear songs that are written as part of the show rather than listening to lines written to introduce or justify a cover.

The Wedding Singer runs until Saturday 18 March and if you’re up for a really good night out this week I couldn’t recommend it more.

Please note, parental guidance is advised due to the occasional use of strong language.

*My +1 last night was vaguely expecting some kind of Al Jolson tribute but she was thinking of The Jazz Singer.