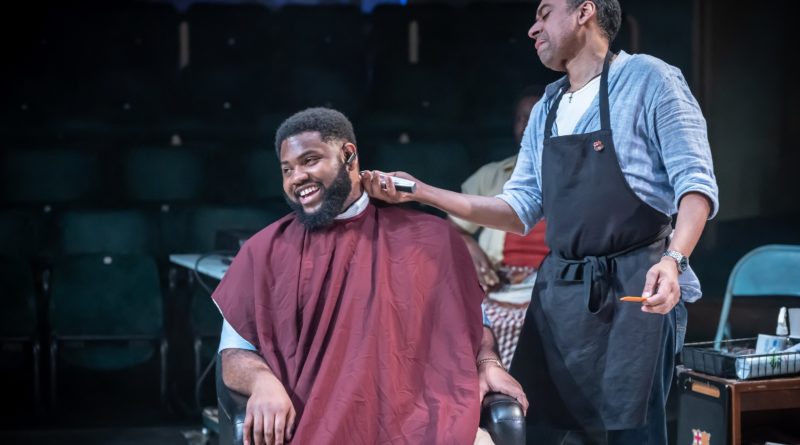 The Barbershop Chronicles is at the Bristol Old Vic for quite a long run, which is generally a good sign in terms of quality, but I wasn’t quite sure what to expect having followed my usual policy of trying to see shows without forming any preconceptions.

We arrived early and decided to go straight to our seats and I’m very glad we did because there was a lot going on the stage from well before the official start of the show. It was almost impossible to tell the actors from the audience as people on stage sat in barbers chairs, chatted, threw a few dance moves and hung around the edges.

There is also audience seating at the back of the stage to further mix things up. The atmosphere was fantastic as we walked in, happy and joyful with lots of laughter and waving on and off stage, and I’m still not sure exactly where the warm-up ended and the show started – maybe the moment when we realised that most of the people on stage had moved into synchronised dance moves, or the moment when we realised that the cast had changed from looking at the audience to looking at a TV playing a football match that only they could see.

A lot happens in this play, yet also very little; men go into barber shops, talk and occasionally argue. They talk about how to be a good father, about Mugabe and reclaiming land from white farmers, about how some languages get translated one to another via English because there is no direct route, about work and families and women.

As we move from barbershops in London and Ghana, Nigeria and Lagos, South Africa and Zimbabwe, we find that we are hearing related life stories from different angles with the tellers in Africa and London: an estranged father and son, a nephew and uncle, brothers. In London we see a young man growing up and finding out secrets that have been held to try to protect him. There are a lot of strands coming together in these chronicles and throughout there is laughter and camaraderie and warmth alongside stories of abusive childhoods, discrimination and poverty.

Each barbershop sign had a very different feel in line with its home country, as did the singing and dancing between the different locations. Despite there being only a few changes – the addition of a mattress on the floor, a better or worse quality of barbers chair, clothing – each location was distinctly different.

I particularly liked the moves from one country to another, where the stage became a mass of movement and sound that coalesced into a new scene. Each new location was signalled lyrically within the singing, by the highlighting of a different barber shop sign and by the lights on the overhead globe. The globe itself, a large metal line-drawing of the countries of the word was an impressive feature that overhang the stage, coming into it’s own on each country change as the outline of that country was lit up.

And then there’s the harder subjects to write about. I’m a white middle-aged woman who lives in a provincial monocultural town. I’ve only set foot in a barbershop once in my life, with my son. I have to recognise that many of the issues raised here are not issues I have to deal with: my family aren’t spread around the world, I am in the privileged position of not being discriminated against because of my colour.

The world that I am getting a glimpse into in this show is one that is very different to my life experiences in terms of both race and gender. I recognise the environment where friends, acquaintances and strangers come together and engage in free-rolling discussions about whatever comes up, and how that leads to small insights and bigger ideas within all the small talk and the telling of bad jokes: I’ve been a local in many pubs like this, and in fact within the play there is a mention in the London barber shop that it provides the meeting place for non-drinkers.

There is a huge range of subjects covered in these short conversations to think and learn about, from the use of waste wine as payment for vineyard workers in South Africa and the problems that caused to how Mugabe is viewed through different lenses; from the role of a man within a family and as a father to how men express or suppress emotion.

I haven’t name checked the actors, writer, director and the rest of the team that have put this beauty together, but take it from me: they’re doing an excellent job and this is worth seeing.

I did really enjoy this play for lots of reasons. Firstly the obvious; the spectacle of the special effects and the dancing and singing. Secondly for the comedy, and there were some beautifully funny moments in there; the proud announcement that someone had reversed a car and ‘didn’t even crash’, the Bad Boy’s larger-than-life bragging and strutting.

I’d love to see it again because there are so many characters to watch at times that it’s impossible to see everything; some of the reactions to things others are saying are comedy gold. And also because I suspect if I revisited I’d find more crosslinks between and more depth within the multiple vignettes that make up this glorious whole.

For further information and to book online, visit bristololdvic.org.uk

Image by Marc Brenner, with thanks 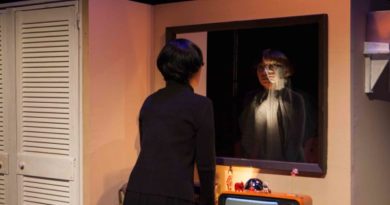