Your boyfriend dumps you so you go and get a new hairstyle, right? That’ll show him. Unless you’re a woman known only as Fleabag: then your reaction would be embark on a sex and booze binge, willing to shag anything that comes into your eyeline, including unattractive fellow passengers on the tube. Perhaps the man who is interviewing you for a job might appreciate a flash of your bra?

Well, your boyfriend did walk out because of that huge wank you had in bed, whilst he was trying to sleep. And the guinea-pig themed cafe that you run is losing both your interest and its custom since your best friend, Boo, accidentally killed herself in despair at her boyfriend’s infidelity. Life’s a bit shit, really. But you’ll rise above it in your own way.

Oh, does this all sound a bit too in your face? It should. Maddie Rice in the title (and only) role has a confidence that is so entrenched, a self-awareness that is so sharp that she’s almost scary. Her matter-of-factness and fortright attitude demand that you listen to what she has to say. And you’d be right to take note because here is a woman who has keen observational skills about the world we live in, documenting the ugliness that surrounds us in the most entertaining way. Fleabag is unforgiving and laugh-out-loud funny. She is also painfully vulnerable, though she’d never admit that.

It’s obvious that all is not quite right with this almost plummily-accented woman who sits majestically tall on a stall before us and that her apparent self-love masks more than a little self-loathing. But why? When it comes, the POW! moment is almost excruciating.

I’m not sure I was supposed to feel much empathy for her but I did and, in the main, I liked the woman Fleabag and I’d willingly go for a drink with her (though I might leave before she did me any real harm). I think that this play aimed to be offensive too but, actually, I enjoyed her crudeness and I loved her terrifying honesty. And, so, right now, it may still be morning but I would probably be wise to go to the fridge, grab that half-empty bottle of wine and sit in stillness to question my own morality!

There’s a Fleabag in all of us.

Fleabag shows at the Brewery Theatre until Saturday 7th February 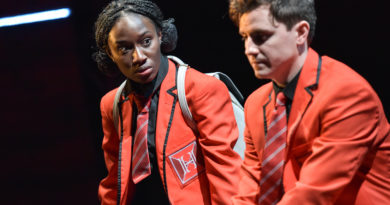