I thought that I’d only seen the 1990 film that propelled Demi Moore to superstardom once. And so, on seeing Ghost in its reincarnation as a Musical at The Bristol Hippodrome, it was a surprise that, after two and a half decades, the finer points of the story came flooding back to me. Testament to the performances in that blockbuster maybe? More likely, the result of having a scene from the movie thrust upon us for years? You know the one, where Patrick Swayze’s Sam gets Moore’s Molly unnecessarily mucky at her potter’s wheel? An apparently iconic Hollywood moment that had us groaning for salvation from a relentless loop of The Righteous Brothers’ Unchained Melody – it played on the radio for years, it seemed.

But, I found myself remembering who killed Sam and why, recalling the special effects that denote Light and Dark, the comedy of Whoopi Goldberg and even the unhinged Subway Ghost. But does this much-loved film translate into a convincing musical? Not really. With the exception of ‘Are you a Believer’, a Gospel number performed by Jacqui Dubois’ physic fraud Oda Mae and backed up well by Tarisha Romick and Simbi Akande, there is no good reason to inject music into this story. Every word of the entire show is crystal clear so, although no meaning is lost through song, the flow is interrupted somewhat by it as though the cast are reluctant to deliver. Andy Moss as Sam sounds strong, particularly when he visits and revisits Unchained Melody. And mate, I know you’ve just died and you literally are in limbo at the moment but, please straighten up, stand taller. It’s fortunate that Molly can’t actually see you as she might have wondered why death has taken the oomph out of the love of her life. Where has her man gone? Nice guy, though. After a battering from the vile tabloid press for her performance as Molly (and time away from the show due to respiratory problems), it was always going to be difficult for Girls Aloud’s Sarah Harding to take a deep breath and try again. I liked the woman’s fortitude and you could feel her determination to do this gig right but she needs to let that breath out more slowly and really feel the part, let her voice find the lyrics and make the devastated Molly her own character. I hope that, given time, Harding will be able to stick up two fingers to the press and draw upon her inner strength. The undeniable star of the show was Dubois, who deservedly got the biggest cheer from the audience. Given, Oda Mae (played by Goldberg in the film) is the meatiest character, the one who has fun and lightens the mood. Even so, you need the right person in the role and Dubois is it, playing on laughs and clearly enjoying the whole experience.

The rest of the cast holds the whole thing together well. Alistair David’s choreography flowing easily with no huge flourishes but keeping it all very tidy. And, in a nutshell, that’s how Ghost The Musical is – clean (to the point of clinical), simple and unchallenging. Mark Bailey’s set design is unfussy and straight edged. Richard Pinner’s illusions tell us all we need to know but do not wow. Eurythmics’ Dave Stewart has paired up with Glenn Ballard to produce a score that is so benign as to be inconsequential and I’d have preferred to see this without music. My 10 year old companion, however, really enjoyed it and is currently sitting in the other room youtubing songs from the show.

Ghost The Musical plays at The Bristol Hippodrome until Saturday 17th September, before continuing it UK tour

Image by Darren Bell, with thanks 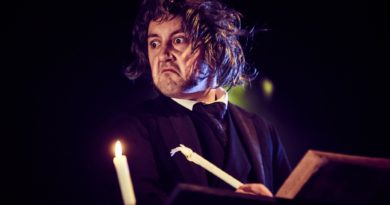 A Christmas Carol at Plymouth Athenaeum 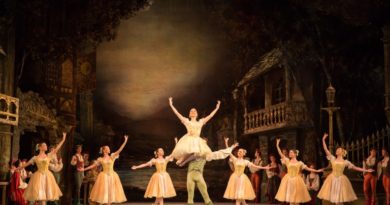