Living Spit’s quirky brand of historical comedy is back with their well-received show The Six Wives of Henry VIII.

This was my first Living Spit experience, and I had heard really great things about their irreverent productions. Walking into Theatre Tropicana, the room was fuller than I have ever seen it (which was so lovely to see) – buzzing with a real mix of people, from older to quite young, most looking like fans of the duo already.

Opening with a little re-enactment of the actors receiving a bad review of a recent production; and noticing the similarity between Howard Coggins and Henry VIII, the two decide to tell the story of Henry VIII’s six wives. Cue: chaotic costume changes as Stu McLoughlin plays… well, everyone else.

With Dad jokes galore and slightly more historical accuracy than a Blackadder episode, both performers comedically engage with the material with what looks like a school play budget. Great moments such as a Jeremy Kyle-esque lie detector test, and a Blind Date episode were highlights that had the audience around me in hysterics. The music has a folksy, local band vibe to it; and is just funny enough to keep you engaged through some lengthy songs at times.

I’ll admit that some of the “meta” moments lagged, and maybe weren’t as successfully done as other shows I’ve seen, but Coggins and McLoughlin are so much fun that you kind of forgive it. For me, the Kraftwerk tribute to Anne Cleeves was the best and most successful part of the production, and a well-timed change in tone so late in the show.

Both performers had standout moments, and the chemistry between them was brilliant – more than anything, their charm comes from how much you kind of want to muck about with them.

The Six Wives of Henry VIII is currently on tour all over the South West and beyond. Details here

Image by Farrows Creative with thanks 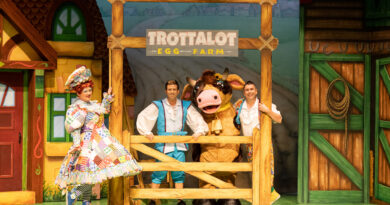 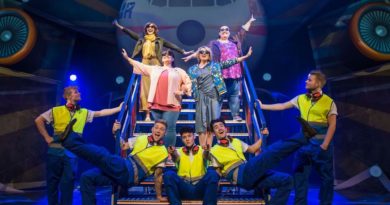