“That’s the best thing I’ve ever seen!” enthuses my 15 year old daughter on leaving Bristol Hippodrome, surrounded by people feeling positive and up-beat, who have also spent the past 2 and a half hours (plus interval) watching Everybody’s Talking About Jamie.

Praise indeed from someone who, like our protagonist Jamie New and his classmates, is in her final year of secondary school and feeling pressured to consider what comes next in life. She has also seen a lot of theatre productions and is a fan of RuPaul (who isn’t?), maybe a pre-requisite of going to see a show about a 16 year old boy who dreams of being a Drag Queen and is determined to wear a dress to Prom.

Based on the true story of Jamie Campbell – everyone at the Hipp is excited tonight because the real Jamie is actually in the audience, a couple of rows in front of us; he invites the audience to take selfies with him during interval – and his subsequent documentary ‘Jamie: Drag Queen at 16’, Everybody’s Talking About Jamie urges us all to let our hair down in an age of gloom, to embrace each other’s differences and to have a bit of well-deserved fun.

Difficult to sound like a teenager when you’re not one so this is impressive work from the creators Dan Gillespie Sells (Music and Orchestration), Jonathan Butterell (Original Director and Co-Writer) and Tom Macrae (Book and Lyrics) because they manage to achieve this. Again, I look to a real Year 11 pupil for confirmation. “Do they sound like kids today?” I ask. “Yes. It’s just like that in my classes” (with less singing and dancing, one presumes).

Those scenes, the ones that feature the Mayfield School Class of 2020, are the ones that make you want to spin around in the aisle complete with the silly grin on your face that you can’t suppress. So feel-good, so youthful, so joyous. Kate Prince’s choreography is fresh and great fun whenever the younger members of the cast burst into song and dance, Anna Fleischle’s clever set design allowing desks to be seamlessly shifted to facilitate their moves. Fleischle’s set has many moveable pieces and a more permanent building like structure (that houses the band on its top floor) so that we are transported various Sheffield locations, both inside and out. Lucy Carter’s Lighting Design is notable here – the bedroom scene is particularly magical.

Layton Williams plays an exuberant and believable Jamie New, someone you’d definitely want to be friends with. Pritti understands that. Jamie’s BBF is played by Sharan Phull, a name to look out for, and it’s hard not to straighten your own back as we witness her Pritti Pasha grow from studious outsider (a Muslim with a Hindi name) to kick-ass heroine in defence of herself, Jamie and all the could-be-trodden-on people who don’t quite fit in. Not everyone loves Jamie – his nemesis is bully boy Dean Paxton, a Peter Panesque George Sampson, who tries to taunt Jamie for being gay, much to Jamie’s confusion because he is gay, openly so, so how’s it even an insult? And then there’s that bloody school Careers’ Advisor, Miss Hedge (Laura Denning), who tells our Jamie that he can’t wear make up/girls shoes/a dress to Prom. Good for him then that he has solid, loving folk on his side like his mum, Margaret, played by Amy Ellen Richardson, easily the strongest voice of the entire cast, full of heart-breaking emotion for her son – go on then, try not to well up when she sings ‘He’s My Boy’. Actually, don’t. Just let it go. Also battling J’s corner is man-eating, sewer-mouthed Ray, who, as in the film of the same name, is played by a sassy Shobna Gulati. And then there’s (former) Drag Queen, Hugo/Loco Chanelle, owner of the drag shop. Shane Richie is Hugo and we’re both big fans of this actor, who radiates warmth of weighted blanket proportions, as though he’s wrapping his arms around you and telling you everything is going to be alright. Big up to his fellow Drag Queens too, particularly during the Finale.

This warmth is what my daughter loved most about the show. That, despite ignorance and/or intolerance, (almost) everyone comes to accept that Jamie is more than just a boy in a dress. All in all this is a tale of hope, friendship, being who you are and not giving a shit about what others say – told through songs you’d listen to for their own sake, dancing that provokes you to get up yourself and shake it out and acting that makes it seem as though you’re still watching that documentary, albeit the funnest one in the world with added glamour, colour and spins.

Everybody’s Talking About Jamie plays at the Bristol Hippodrome until Saturday 23 October before continuing its UK Tour. 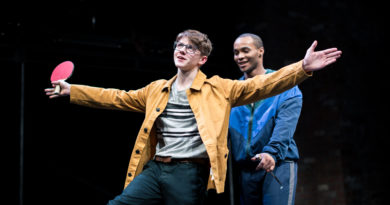