From the moment the cast of Bristol Old Vic Young Company jerks its way onto the suitably stark, black set of the Old Vic’s Studio, you know this is going to be an energetic take on Bertolt Brecht’s homage to impoverished workers, St Joan of the Stockyards, a play that lifts Joan of Arc from the wars of 15th Century France and places her in Chicago’s meat packing industry during the Great Depressionary (depressive?) era of the 1930s.

It is a remarkable and vigorous entrance to a darkly humourous piece of theatre, taking one instantly and unshakeably to Pink Floyd’s ‘The Wall’, had it been recorded in Berlin. Ben Osborn’s soundtrack is industrial in the extreme and, although set in Illinois, this music screams Germany, probably in acknowledgement of Brecht’s homeland, so much so that, when we got home, Mark introduced me to Einsturzende Neubauten and Düsseldorf electropunks, D.A.F.. Yes, the music sits as comfortably with this production as a believer in a church pew, as a dead steer behind a butcher’s window.

Director Nik Partridge has reminded us of a tale of downtrodden, underemployed workers, which will unfortunately resound with many UK residents, as we hurtle towards an uncertain future of weakened unions, bigger than big business and all the poverty that capitalism invariably and unavoidably bestows upon the masses. You can’t help but have an eerily creeping sense of history repeating.

But who will save us? Who will save them? Joan Dark certainly tries, using her ‘black straw hat’ (Sally Army-like warriors of Christ) tactics to put these unfortunate souls on the path to a better tomorrow, where inequalities will cease to exist and exploitation will end. Meanwhile, in the material world, Joan helps to feed the undernourished workers and implores top meat-packing plant owner, the vile but hoping to reform Pierpont Mauler, to see his workforce not as an extension of his cattle but as fellow human beings, as brothers.

Kate Alhadeff is strong in the role of Joan Dark, giving her an innocent glow and a hope that spirals into despair, while Joshua Robinson’s capitalist Mauler is smarmy (great sneer) and detestable but human enough to be a little likeable too. As ever with the Bristol Old Vic Young Company, this work is about community and it is the crowd scenes, which thankfully are many and often, that really stand out, in no little way thanks to Maisie Newman’s excellent movement direction and Osborn’s aforementioned musical direction.

Rosanna Vize’s set is perfect for the job, where the only glimmer of light in a dark old world is a huge illuminated cross of red and blue (of the Tricolore/Stars and Stripes, one assumes). The stage takes up the entire centre of the floor, easily the best use of the Studio space as I’ve ever seen.

A little of the dialogue may have been lost every now and again. This is a wordy piece that probably can’t afford to lose many sentences in a story-heavy script but this is easily forgiven due to the energy and passion that these young actors bring to the stage. They seem to be on track to ensure that Bristol’s record for excellence in theatre continues.

Image by Camilla Adams, with thanks 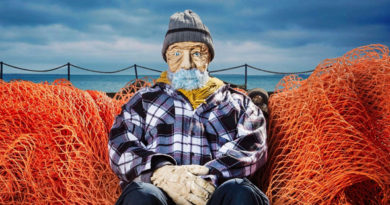 In our Hands at Theatre Tropicana