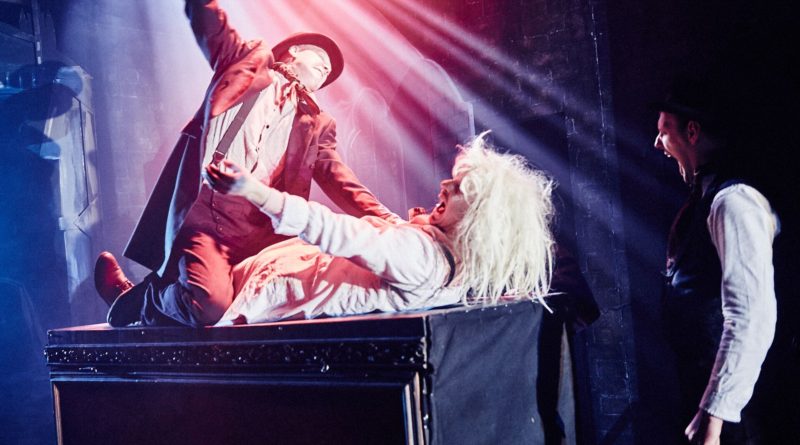 My all-time funny people dinner party? Easy – Susie Donkin and Pauline Morel from Spitz and Co, my bloke, and the lads from Le Navet Bete. I’ll do the cooking but after that can I just sit in the corner of the room quietly and cry my eyes out with laughter? Because I’ve never seen either of those two acts – with their amazing ability to work as a part of their team, whilst being totally individual – without leaving the theatre with my wet eyes and my smile wide.

This week, Le Navet Bete return to Bristol with Bram Stoker’s Dracula. No! Not Bram Stoker – the filthy liar – but this ‘other’ account from the point of view of Van Helsing, the Buffy of the late Nineteenth Century. This wannabe storyteller-vampire hunter will tell the classic story in his own words and from his own house and if it can go wrong it just might. This is slapstick galore. This is physical theatre. This is ridiculous silliness. This is the speediest costume changes in the history of the theatre (don’t quote me). This is Dracula: The Bloody Truth.

Before we arrived at the Redgrave Theatre, we wondered why this Clifton venue had been chosen over their usual Bristol haunt, the Tobacco Factory. But it became quickly obvious. The wideness of the stage here easily houses what is surely the most impressive set that Le Navet Bete have ever worked in (we first saw them in a circus tent with a few props)? A gothic delight of falling down buildings, fireplaces and doors – this theatre is perfect for the job.

Although they would have you believe that there are dozens of actors on stage, there are just four of them up there. As they quick-change from one character to the next, their fast paced zaniness is both hilarious and admirable. Weaving through the three doors on stage, we meet characters in Transylvania, Whitby, Essex, as many women as men because these boys do the female so well (Matt’s Mina is super-sweet, super-brave and super-sexy all at once. Sorry, I always have to mention Matt).

Behind their clowning around is the surety that this troupe have worked incredibly hard to get everything looking so wrong and the comic timing is spot on, helped in no small way by the good writing, complete with innuendo and almost-swearing. As the years have gone on, Le Navet Bete have lessened the acrobatics and upped the acting. That’s not to say it’s less physical – on the contrary, it must be exhausting! But they have evolved into a complete theatre experience.

Billed at age 8 years plus, this production is pretty dark and scary in parts, so maybe don’t bring your really wee ones. Due to great lighting, in yer face sound, fun and versatile costumes and make up that is as realistic as the madness allows, this is a winner of a show that will have you laughing out loud (and jumping a little).

Ooh, there’s dancing too. Funny, (slightly) sexy and completely off the wall, Le Navet Bete should not be missed. 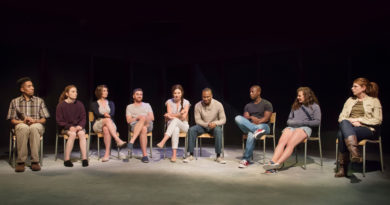