In this England of 1712, the witch hunting craze is a few decades old. However, it remains a very real part of living memory in the Hertfordshire village of Walkern, where accusations against woman cavorting with the Devil are threatening to make a comeback. Rebecca Lenkiewicz’s play, Jane Wenham: The Witch of Walkern, deals with the paranoia and suspicion that takes hold of some of those Hertfordshire villagers, finding themselves at odds with the forgiving and more practical nature of others who wish to keep the terrifying mistakes of the past right there.

After the persecution and subsequent death of her friend, Eleanor Thorn, the sexagenarian, Jane Wenham, a foraging woman who makes a meagre living from her herbal salves, finds herself under scrutiny for Witchcraft for the second time in her life. Eleanor’s daughter, Ann Thorn, has had a neglected childhood and shares a connection with Jane, her guardian. Every village has a ‘cunning woman’ such as Jane Wenham (a local, after all) and some believe that it should simply be left at that. Others see in her an answer to realities they don’t understand – her curative abilities or the untimely death of a child. The young and pious Reverend Crane has been sent to Walkern to investigate the validity of those pointing fingers, to check out the liberal attitude of Francis Hutchinson, the (retired) Bishop of Down and Conor, now resident in Walkern. The two men disagree bitterly about the existence of Witchcraft; the older man has a social conscience and had borne witness to the mass hysteria and the subsequent terrifying atrocities committed during the previous century, while the younger possesses a sexual frustration that, one fears, may be responsible for his hatred of females.

This play is about sex. It’s about repressed desire, seeking solace in another’s embrace and using sex for survival. It discusses sexual control over/by others and adultery. It speaks of loss of virginity, the coming of age and lesbianism. It is also a play about the blind acceptance of the Bible and the placement of God’s will high above the material realm. It’s a history lesson about the sin of poverty, the privilege of royalty and the cruelty of slavery.

James Button’s set holds a deep green forest-like backdrop with a number of cleverly concealed doors, which are opened and closed to transform the set from the village square, to the Bishop’s home (which her shares with his servant lover and former slave, Kemi Martha), to a field, a wood, a glade, Widow Higgins’ alehouse and the goal. Complemented by Richard Howell’s lighting design, the ever present gallows periodically illuminate a cross, there to remind everyone exactly who yields the power.  A similarly lit circle denotes maybe the circle a coven and probably the roundness of woman, the strength of the female.

Ria Parry’s direction is sharp and, in this rare play of two acts, the most intense scene probably takes place in Jane Wenham’s hovel when the villagers descend noisily upon the accused, terrorising the poor woman and giving the audience a fright we may find hard to forget. But the hideousness isn’t over, because we are introduced to the pricker, the witch detector, whose it is his job is to bleed a woman’s body to determine whether the Devil has drunk her blood, a practise as difficult for the modern Brit to understand as the swimming of potential witches across a river to see whether they drown and then burning them if they don’t.

The entire cast is strong. David Acton plays a very likeable, if flawed, Bishop, doubling up as a mournfully jealous Jack-the-Lad of old, Saul Paterson, his delivery provoking a few laughs among the audience. We snigger in disbelief at the absurdity of young Crane’s skewed reasoning, played by Tim Delap so convincingly that we actually do feel sorry for the poor misguided fellow (I was kind of wishing that the Widow would put her hand in his breeches to relieve him).

In a feminist show that begs us to remain true to ourselves, to be nobody’s lackey, it is only right that the women should shine. Although her accent seems a little suspect, Amanda Bellamy is utterly believable as Jane the hag and, in profile, she pulls a face that is almost a caricature of one. Bellamy’s ‘witch’ is gentle and grandmotherly, certainly no fool. Rachel Sanders is a warm and giving Widow and you can see why Andrew Macklin’s grieving Fergal McGuire would find solace in her bosom. Displaying her versatility, Sanders slides effortlessly into Bridget Hurst, a character eventually racked by pain and grief, a soul who seeks answers at any cost. Judith Coke is the blind and bitter Priddy Goodstein, a woman of a similar age to Jane with a fair few stories to share. Hannah Hatch as the confused and lonely Ann Thorn is so fully into her role that, at times, she physically shakes.  Cat Simmons is beautiful of face and voice as the determined Femi Martha, a character that carries her terrible pain with a grace that we would all like to possess – her songs are sweet yet devastating and it is fitting that her words should be the last we hear.

Jane Wenham: The Witch of Walkern is a play that is refreshingly old-fashioned in its structure, yet thoroughly modern. Lenkiewicz’s play easily gives the Old Vic’s The Crucible a run for its money. 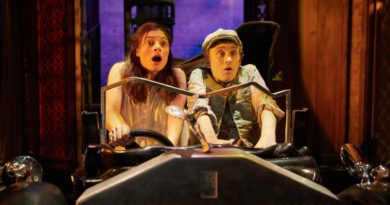