On Wednesday 9th December I bore witness to the latest piece of history to get the Living Spit treatment. It’s obviously Christmas time and I’m a bit of a Christmas cheer Scrooge myself, so what could be better for getting into the spirit of the season than to see Howard Coggins and Stu Mcloughlin tackle Dickens’ A Christmas Carol? Not much.

We all know the story, the mean and miserly Ebenezer Scrooge is visited by three ghosts during the night before Christmas morning. They show him how life was, how life is and how life will eventually be if he doesn’t change his ways. There are certainly no surprises as far as the main plot goes but the evening is all about Howard and Stu’s timing and delivery. Guitars, songs, wigs, (slight) nakedness, teddy bears and even a ballet tutu and leotard are deployed to great comic effect as Howard’s bearded Daily Mail reading Scrooge is visited by Stu’s three spirits of Christmas. Each with their own memorable accent and outfit, Stu quickly changes in the wings to keep the play moving along at a great pace. Even the biggest costume change, which would normally come during an interval, was accompanied by Howard on the guitar singing The Interval Song which received great applause. My personal favourite was the Ghost of Christmas Present complete with seasonal knitwear, low budget Mighty Boosh style headdress and an accent which I have been trying to place ever since. It sounded a bit like an impression of Alan Bennett doing an impression of Alec Guinness and had me really giggling.

Anyone who has seen a Living Spit production before will already be familiar with their brand of self referential humour and slight naughtiness so will likely need no encouragement to come and see this. If you’ve never seen them before, you are really missing out and this play makes for a perfect introduction to the company. It’s no surprise that this show is selling out wherever it goes, Living Spit are continuing to build a loyal fan base in the area and are highly deserving of their praise.

The show has been touring the South West since early December and plays in Bristol and Blagdon between now and the end of the year and is, apart from a couple of matinees, largely sold out. In early January they will be bringing the show to The Bay in Weston-super-Mare as part of a run of Theatre@TheBay shows at the site of the old Tropicana, the venue that played host to Banksy’s Dismaland earlier this year. This is part of a drive to promote The Bay as a viable hub for arts and theatre in Weston and I would urge you go along and support it.

Visit www.livingspit.co.uk to check performance dates and venues. Don’t leave it too long though as more dates have been added and are already filling up. Finally, buy a programme, it’s only 50p but may well need it! 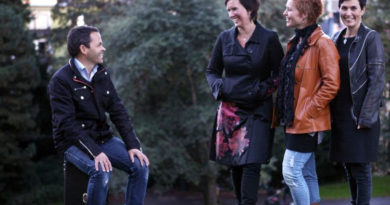