Any volunteers for Minotaur sacrifice? Yes, plenty of little audience hands waving enthusiastically to be chosen. What a perfect way to introduce theatre to this young crowd.

The setting is ancient Greece where King Minos rules Crete, with the Minotaur, his monstrous son – half man, half bull – roaming beneath the palace in a labyrinth. The creature’s most frequent visitor is his half sister, Princess Ariadne. When King Minos demands child sacrifices for the Minotaur from his enemy, King Aegeus of Athens, this neighbour is powerless to resist. But just as things seem doomed, a hero appears, in the shape of Theseus, a long lost son.

As we walk through the door we are greeted by the actors who welcome us into the theatre. The invitation to choose our floor space also permits participation from the start. And then we are asked, once settled, to find a new space. This all adds to the buzz of anticipation of live theatre; who better to expose this to than first timers fresh from the classroom.

The action unfolds with the four actors donning their simple but effective costumes. A dress is taken from a dummy stand and put on. A robe is similarly picked up and wrapped around, giving transparency to the act of getting into character. The weak and feable King Aegeus (played by Malcom Hamilton) wears a paper cracker crown – one of the many unostentatious yet ingenious touches of this production.

Ariadne (Jessica Macdonald who also is a key player with the music) has something of the teenager about her. Stormy tempers and much oscillating between loving and hating the Minotaur, her monstrous brother who also clearly bonds with her.

Music is used to very good effect as a vehicle for changing mood and setting scene – gongs, cello, electic guitar and some beautiful and haunting vocal harmonies all play their part.

With Minotaur, writer Adam Peck is sucessful in capturing the attention of a younger audience (the play is pitched at 7+ years). Already accomplished (such as with the award-winning Cinderella: a Fairytale) Peck clearly has a talent for drawing his audience in. Minotaur is a hundred times more absorbing than a dry book on Greek myths. And it is also alot of fun, with the audience, young and older, thoroughly engaged.

The show has toured schools for the last month giving the actors an opportunity practise moving around children who are deliberately part of the performing space. Part of the process has been giving children the chance of their feedback through workshops. The result is a production that is confident and professional. This is especially evident during action sequences, with hero Theseus (Jack Holden) wielding his sword in an extremely well-choreographed but humorous way. And the tyrant King Minos (Roddy Peters) chosing sacrificial children from the audience is a work of inspired genius.

Minotour is a triumph; brilliantly produced and delivered. Directed slickly by Toby Hulse, this is not a story for the feint-hearted. The tale is dark and not without sadness, though the well-delivered humour helps digest this. And if there are some loose threads at the end – well we can look forward to Minotaur part 2. Can’t wait! 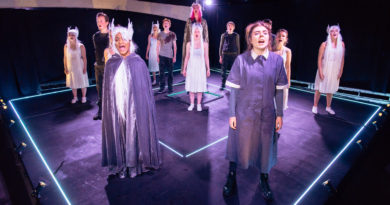 The Love of the Nightingale at The Bierkeller Theatre 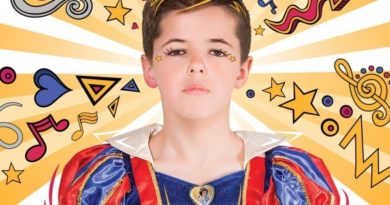