Ahead of The Tale of the Cockatrice, which arrives at Clevedon’s Theatre Shop this Christmas break (28/29th December), we interview Katie Underhay from Mumblecrust Theatre!

– It’s great to have the chance to see a local theatre company so close to our home town. What’s the best thing about ‘coming home’?
It’s so nice to be performing in Clevedon. It’s the town my mum grew up in and I grew up down the road in Worle! Anthony Burbridge, the other half of Mumblecrust Theatre, is from Taunton and now lives in Bristol, so it’s great to even be in Somerset. We’ve taken this show all the way up to Scotland to do the Edinburgh Fringe so it’s crazy we haven’t performed it here yet! The best thing is going to be showing my family and old friends. My brother, my friends from BTEC Performing Arts at Weston College, and even my GCSE drama teacher from Worle School will be there!
– What’s the story about, in a nutshell?
It’s about a monster rampaging a Saxon village and how a young nun tries to save the day! It’s sort of a story within a story as we play two crazy storytellers who tell the tale of this creature using all our collected junk through years of travelling! It’s loosely based on an old legend and the prologue, about an evil queen and a knight, is actually true!
– What is a cockatrice?
A cockatrice is part snake, part cockerel and part bat. We didn’t invent the monster – it’s actually a really old mythological creature. One of the reasons we like the cockatrice so much is that it’s one of very few British mythological creatures. You might think of dragons as very English, but they featured a lot in Asian mythology, for instance. There aren’t many that only derive from Britain and we think that’s pretty cool.
– The legend is set in the historical village of Wherwell. Do the villages there still commemorate the cockatrice? (If so, did they help you with your research?)
We did a lot of research about the legend through a website about Wherwell but we didn’t actually visit until the day we won our two Brighton Fringe Awards! We knew there was a chance that we’d be driving all the way to Brighton that day, just to find out we hadn’t won anything, so we decided to do something special before the awards ceremony. Wherwell Priory, the main setting of the play, isn’t actually there anymore but we met the woman who lives on the land where it used to be and she told us all about it! We saw an old plaque dedicated to the queen in the show, which was really exciting. We’re hopefully going to be performing the show there soon.
– How many puppets do you have in the show? Which is your favourite?
That’s kind of a difficult question to answer! Puppets in and of themselves, there are four, but we do a lot of object theatre (making puppets out of everyday items) so there are quite a few more! I think although the cockatrice is super cool, and Sister Mary-Ann (our nun) is cute as a button, my favourite is probably the farmer because he is actually repurposed from a production we created a few years ago. We’ve become very close over the years!
– The Tale of the Cockatrice sounds fabulously dark. What’s the recommended age?
It certainly is spooky! The recommended age is six and up, but we’ve had everyone from three-years-old to 70-years-old loving the show. We wanted to create something sophisticated and scary, atmospheric and meaningful. The show was created to entertain all ages, but to fill a niche in children’s theatre, where slightly older children often get left out!
– What’s next for Mumblecrust Theatre
Over spring we’ll be at The Lyric Bridport, two London venues, the Everyman Theatre in Cheltenham and heading back to Brighton Fringe! You can find the dates for the rest of the tour on our website www.mumblecrust.com

For tickets to see The Tale of the Cockatrice at Theatre Shop Clevedon, click here 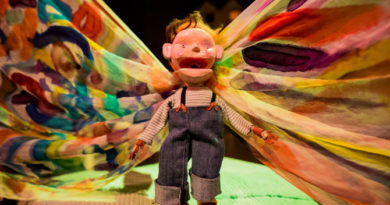