Penelope is the wife of Odysseus, the famed Greek war hero, whom she married at 15. His story of courage and wisdom is often told; hers rarely is.

In Penelope Retold, Caroline Horton goes to huge lengths to rectify that. One in a series of one-woman plays commissioned by Derby Theatre that turn some of the classics on their heads to tell them from the marginalised, often silent, female character’s perspective, Penelope Retold is a woman’s fight against loneliness and a critique of her place in the Patriarchy to which she is bound.

The Brewery Theatre stage houses a big, luxurious bed carved by the powerful Odysseus from a great living olive tree and thus rooted to the spot, keeping the gorgeous Penelope a prisoner amongst the silks and furs that surround her. Never once leaving the cruel opulence of the martial bed, our heroine writhes, dances, plays, imagines, sings, chats and breaks her heart.

She waits for her husband to return from the Trojan War, having departed less than a year after their wedding, leaving her with their baby, Telemachus. She is the single mother. She is a military wife. She is young and lovely, still clad in her fairytale petticoated wedding skirt, topped with a dirty white vest and sometimes sparkly, sometimes sad, saucer eyes.

She waits patiently yet impatiently for the lover who has deserted her, condemning her to a life of near emptiness. This a woman who needs to move on, as she longs for the waves to take her away, unable to turn to other eager suitors. She waits for nineteen years, alternating between a twinkly child-like state and an inflamed, embittered older woman. She knows this is her place and she’s willing to accept it, she tries to convince us. She tries to convince herself.

As part of her research into the play, Caroline Horton has interviewed military spouses, which she says heavily influenced the work. This isn’t just Penelope’s story or even that of those Forces’ wives who feel that their lives have been put on hold, waiting for their man; this is about anyone who has ever felt trapped in a relationship or who is waiting to meet ‘Mr Right’, whether that be thousands of years ago or this very day in April 2015.

If this all sounds heavy, it isn’t: fun, wit and honesty are key here. Horton plays a host of characters, her own personality seeming to seep into each one, keeping the overall feel of the piece light and playful, using film clips and poetry, interviewing herself with humour and attempting to date others. She is skilful at portraying a young woman in love and you want to climb onto that huge bed to envelop her in a platonic hug because she is so sweet, lost and tragic.  But, ultimately, she feels wronged and her effervescent exterior becomes pierced by a painful to watch yet beautiful to witness neurosis.

As director, Lucy J Skilbeck seems to have worked closely with the artist to ensure that this hour long performance keeps your attention for each and every minute. We find out a great deal about Penelope and about all those women who struggle to find voice, whomever they are, whenever they are. 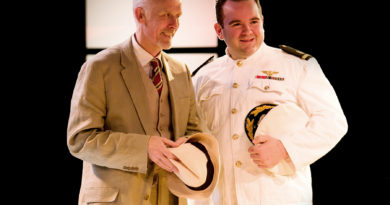