We’ve seen a few theatre productions that include puppets, which use them to bolster a performance rather to BE it. But Red Riding Hood by Norwich Puppet Theatre, in collaboration with Peter O’Rourke, is pure, undiluted puppetry. And brilliant it is too.

The Brewery stage is a collection of wooden beams that are cleverly rearranged and slotted into new positions throughout the show to become a forest, a garden or Granma’s house. The lighting is sometimes foreboding, while at others it is used to illuminate and create figures in silhouette. Ben Glasstone’s music is powerful, at times menacing, in turn joyous, while the songs add lightness to the dark.

The puppets are almost old-fashioned. At the end of the show, we asked one of the puppeteers where we could acquire such a creature but of course we can’t; they’re custom-made. Carved of wood, you want to caress them, feel the smoothness of their round faces and discover how they move so gracefully.

I counted nine puppets in all, controlled by two puppeteers. Puppeteers – is that even the right word? These people are skilled actors and my eyes flitted between the ever-changing expressions on their faces/the movement of their bodies and the masterful way they both brought to life those wooden figures, manipulating them into telling this very well-known folk tale. Beautiful.

Tim Kane’s script is fresh and builds upon the many versions of the story that have gone before. The conversations add to the humanness of the piece and give supporting characters a biography of their own. When the wolf has swallowed Granma and Red gets to meet the carnivorous aggressor in her cottage bed, I realised that the build-up had me wringing my hands, clenching my jaw and then … you’ll see.

A twist that had some of the kids belly-laughing! Yes, this production is well worth a visit.

Recommended for age 4+, I was at first worried that Red Riding Hood might be too ‘young’ for my 8 year old. Then, I reasoned, if I like puppetry how could she be out of the age range? And, absolutely, there is enough material here to keep any adult entertained. The child next to us was probably 2 years old – don’t do it, really! This production does take a little concentration and I might even put the recommended age up to 5 or 6 years?

About ten minutes after we left the Brewery Theatre, we found a craft shop on North St, where we bought a stick of willow for 50p, because my daughter is determined to turn one of her dolls into a real, breathing puppet. THAT is the lasting review here. And this: 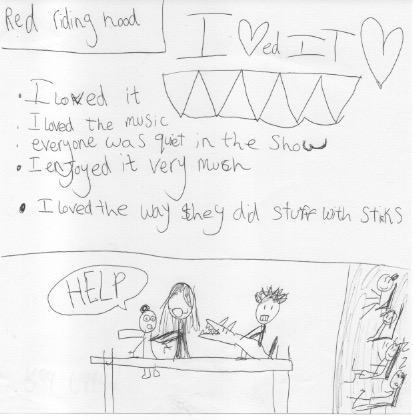 Ooh, and I absolutely adored Granny’s Herb Song. As I sat listening to it, I wondered whether I could get hold of a copy of the words and, whoppee!! – this and a host of educational resources and activities are available on Norwich Puppet Theatre’s website 🙂

Red Riding Hood is at Brewery Theatre until Sunday 22nd February. And then on tour

– Review by Becky Condron and Celeste 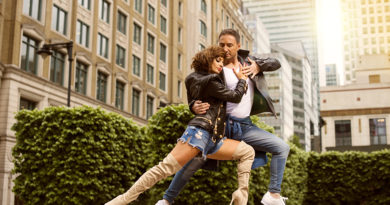