Shakespeare’s Romeo and Juliet is probably one of the best known stories of all-time and an explanation of its plot is unnecessary. But what happens when you introduce an 8 year old to this tale of tragic love, violence, hope and hopelessness?

Well, that probably depends on which production you take her to. Armed with little more than a couple of viewings of Baz Luhrmann’s 1996 film and a handful of pages of the very helpful Orchard Classic Shakespeare Stories for children, we sit in the auditorium of the Tobacco Factory staring at a wooden roundabout on stage and discussing the four paint/blood splattered supporting pillars. “They’re going to have to paint it all again when the play finishes,” she says astutely.

And, before Shakespeare at the Tobacco Factory’s run of Romeo and Juliet is out, there is going to be an abundance of red used and an awful lot of cleaning to do. So much blood! But all in the right places.

Under Polina Kalinina’s direction, this production is set loosely around the events of the 1968 student uprisings in Europe, a time of upheaval and change in a continent where those born to war-weary parents were coming of age, an era when the nature of conflict was being re-evaluated. Verona’s Prince has the back up of police heavies, armed with tear gas, in response to those teenagers who run amok and tear up their own playground to use as weapons, while the older generation attempts to retain the status quo.

Emma Bailey’s set and costume design really captures the feel of the late sixties/early seventies, and never more so than in the dazzling masked ball scene, which is reminiscent of the opening sequence of (the film) Blade, with a delicious glug of glam rock added – sequins, glitter and gas masks abound. Here, where the two lovers first meet, is a riot of music and dance, executed with delight by the entire cast and in a wonderfully energetic piece of teamwork. And it’s a part of the story my daughter was eagerly awaiting.

But she was probably even more impatient for the death of Mercutio. Oliver Hoare gives Romeo’s friend and the Prince’s kinsman an antagonistic edge as a liquor swilling youth who is ready for the fight. I’m not saying that he deserved it but the only unfortunate part about his killing is the out of control spiral of tragedy that ensues. Jonathan Howell’s fight and dance choreography is rich in togetherness, yet each actor is afforded the individuality to be true to his or her own natural movements. Cue another fight! Yet Craig Fuller’s convincing Tybalt is so obviously distraught at his irretrievable actions that his own death at the hands of Romeo is almost inevitable.

Oh, Romeo! Our hero is in love with love itself and Papa Essiedu is a handsome a Romeo as you’re likely to encounter. Essiedu plays Romeo with swagger, so clearly having fun with his role, flirting with the audience, whilst pledging his love to Juliet, his sun in the east. Daisy Whalley, as Juliet, was my daughter’s favourite character and you can understand why – just five years between them and yet a world apart. Whalley completes Romeo and their on-stage chemistry is strong.

For me, two characters stand out. The hippy Friar, played by Paul Currier, is the crossover between the light and dark, which are such an integral part of this play. Complete with yogic sun salutations, here is a man that you feel any teenager would confide in; he’s that understanding youth worker. And, like Currier, Sally Oliver brings what Shakespeare could have made a marginal character to the forefront. As Nurse, Oliver is brash, truthful, resolute and caring. This is a part wonderfully acted and Oliver is maybe even a stage stealer. Plus she really does have the best outfits, including those rollers!

The double suicide climax didn’t leave either of us crying but we were thoughtful and a little worn out at the pure exuberance of this production.

It’s hard to say what my 8 year old made of it all as she hasn’t yet said that much. She was the only child in the audience, though there were plenty of teenagers present. The blood, violence and love scenes didn’t ruffle her and, if you have a young one, only you will know what they can handle and what you want them to see. I can say that, although she didn’t get every word (nor did I!), she knew the bones of the story and understood what was happening. Today, the morning after our Romeo and Juliet theatre outing, she had no hesitation in popping on the film again and quoting a few lines of Shakespeare at me: “‘I dreamt a dream tonight!’ Romeo said that. ‘Bosom of the North,’ Mercutio!”

However versed in the Bard you may be, Shakespeare at the Tobacco Factory will make your heart beat fast. It is nothing short of stunning! 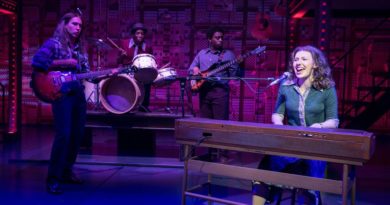 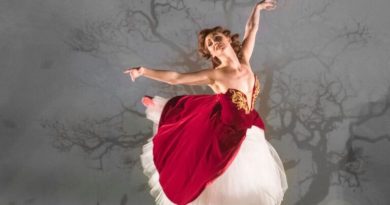