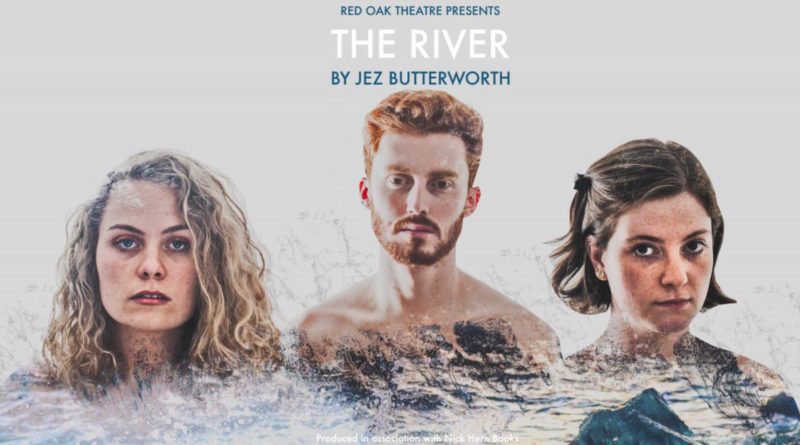 Red Oak theatre company have brought Jez Butterworth’s ‘The River’ to Bristol’s underground venue, The Loco Klub; treating the work with great respect and bringing something fresh with the staging.

Set in rural England, The Man (Jack Hammett) brings The Woman (Katherine Stevens) to a remote cabin, tells her of his love of fly-fishing for sea trout, and at some point over the weekend, tells her he loves her. What we quickly learn is that she is one in a long line of women that he has done this with; always sketching them in a scarlet dress, telling them that they are the only women special enough to take this pilgrimage with him. The movement is careful in these moments and the detail and repetition of this ritual with the women brings a sinister quality to The Man.

Olivia Elsden is The Other Woman, and she brings a flirtatious lightness in her scenes, a sexiness, even in her interrogation of The Man; whereas Steven’s The Woman is more grounded and serious, more earnest in her affections. Jack Hammett changes his demeanour to fit both of them, reflecting back what each of them wanted from him, and becoming increasingly unravelled as they pick his stories apart. The performances were solid and well thought out, all of them felt grounded in reality, despite the very heightened and literary language at times.

April Dalton’s set design is beautiful. Perfectly fitting in Loco Klub’s cavernous venue, the set is sparse and elegant, evoking the feel of seclusion, of being surrounded by water. Ryan Joseph Stafford’s lighting and Yuan Hu’s sound work symbiotically with Dalton’s set to create this feeling of the audience being within the water. Shadows dance across the performers’ faces during transitions, which were some of the most powerful and poignant parts of the show.

If I’m honest, I did feel like I was waiting for something that never really came; and while that’s a flaw of the writing, it is almost a great credit to the performers who kept the tension high throughout. It just sort of fizzled into an ending that left me wondering if I’d maybe missed something. The dialogue felt lengthy and dull at times, but the cast members grappled with it effortlessly and injected as much as life into it as possible.

For me, the standout is that set, which is one of the most innovative I’ve seen; it creates a haunting and beautiful effect that really stuck with me.

Blood Brothers at the Playhouse, Weston