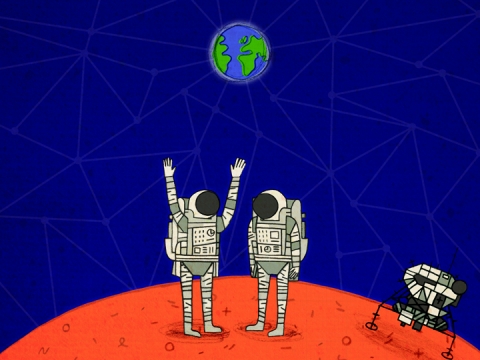 Showcasing new writing from emerging and established writers,  A Play, a Pie and a Pint (originally created by Glasgow’s Òran Mór) is certainly a sterling idea, especially when it embraces so much of the city in which it’s performed.

And everything about this evening screams ‘BRISTOL’ at you.  A delicious hot Stoke’s Croft Pieminister pie, in a box, drenched in gravy, a pint of whatever you fancy, including a choice of Bristol Beer Factory bottles, and a table at the Tobacco Factory Theatre (TFT) Bar is a decent way to start your evening.

Bellies warmed and thirst quenched, we’re over to Brewery Theatre for tonight’s performance of 140 Million Miles, written by Adam Peck and directed by Nik Partridge, last year’s Director-in-Residence at TFT.

I’m a fan of well-considered, custom-built music playlists so, given that this is a play about travelling to Mars, I’m excited to hear Bowie’s ‘Life of Mars’, Elton’s ‘Rocket Man’ and Public Service Broadcast’s ‘Go!’ as we settle into the full-to-capacity theatre.

The stage is set with 2 chairs, 2 suitcases, a couple of books and, what could be more British?: everything you need to make a good cup of tea.

Neil and Dawn are being interviewed by a voice we can never put a face to. Vincenzo Pellegrino’s Reality TVesque voiceover asks the married couple why they would want to be be the first people ever to travel to to the Red Planet. Why do they feel they are the ones for this ‘Mission to Mars: the Trip of a Lifetime’?

‘I’m looking forward to space’, says Dawn. Not Space in the big void sense but space. They’re living with her mum, see? Ah, escapism then. Because everyone has a back story, all of us have wanted to run away at some point. Dawn and Neil are only 32 but have been sweethearts since they were 12, they never argue, they’re really sweet together. And they are so damned Bristol, it hurts. As Neil, Darren Seed does a brilliant line in looking vacant, surprised, concerned. He’s a decent lad and will do anything for his Dawn, played with a definite sense of fun and good-naturedness by Rosie Mason. These are everyday people, solid, down on their luck, needing a new start. He’s a cabbie; she used to work in a call-centre. There’s nothing particularly special about them, they have their questionable outlooks, “We’re not racists but …”, you know them.

So, they’re perfect for a televised 140 million mile, 9 month journey to Mars, erm, apart from the fact that they have no scientific background and don’t have a clue what they’re doing! But they will win the hearts of people all over the world. No-one said this wasn’t a far-fetched concept and the fact that this pair might be a bit ‘too Bristol’ is merely a part of the lunacy of it all because Neil and Dawn are, fundamentally, a product – this is about selling something, about choosing disposable people for the sake of advertising revenue.

Peck interjects easy humour into this comedy and his writing seems effortless for both actors, Mason having particularly strong comic timing. But it’s also cautionary tale – if you’re going to escape, plan it, know what you’re doing, trust only yourself.

As an early evening out, I really can’t fault this. £13 for food, beer and an enjoyable piece of new theatre? That’s a bleeding bargain – and we’re back out on North Street at 8pm, leaving the rest of the night free for anything we might want to follow it up with. Therefore, we make our way home; it’s safe there.

A Play, a Pie and a Pint returns to TFT in November with Happy Hour 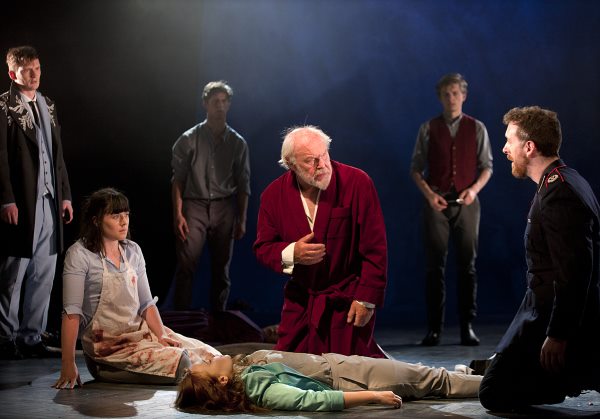 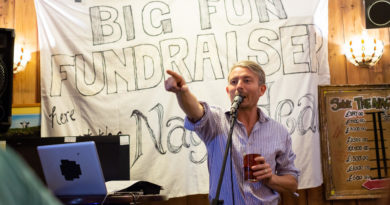