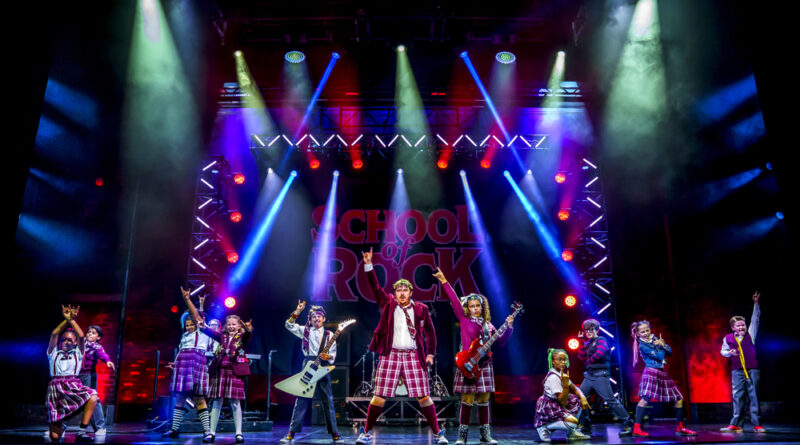 Vivienne Kennedy reviews School of Rock, playing at The Bristol Hippodrome until Saturday 14 May.

I’ll begin with a confession, I have never seen the ‘iconic’ 2003 Jack Black movie School of Rock is based on. I’m not sure why, because it sounds right up my street, so, as I take my seat in the Dress Circle, I’m looking forward to discovering it via this stage adaptation.

School of Rock tells the story of Dewey Finn, a rock guitarist who, by somewhat devious means, finds work as a substitute teacher at a prestigious prep school after getting fired from his band. He soon realises his group of fourth-formers know their music (although their knowledge of rock n roll history is sparse) and could be his ticket to winning the forthcoming Battle of the Bands competition, the winnings being earmarked to pay his rent. While teaching these kids how to rock out, he finds himself falling for the school’s headteacher, Miss Mullins. She is beautiful but uptight until he helps her discover her inner wild child.

The storyline is perhaps a little light, although I like the element of being in the band helping each kid to find themselves and their voice – privileged in many ways, they’ve had to fight to be listened to. That said, while it may not provoke deep thoughts, it is certainly a show that inspires huge grins. I have a smile on my face almost from start to finish.

To me, every song is new, but I’m informed (by the theatre’s website) the playlist includes all the songs from the film plus an additional 14 written by Andrew Lloyd Webber and lyricist Glenn Slater for the show. I’m not sure I would normally associate Andrew Lloyd Webber with rock, but they work.

And the reason they work is mainly because they are performed by an insanely talented cast including a team of 42 amazing children who take it in turns to play 12 roles. They play classical music with the same ease they play heavy rock; they sing like angels; they have great comic timing; at least one of them is a hairography expert; and, perhaps most importantly, they look like they’re having a blast, and that always rubs off on an audience. They also jump about a lot; it makes my ankles hurt just watching them!

The adults, led by Jake Sharp as Dewey Finn (Alex Tomkins at certain performances) and Rebecca Lock as Rosalie Mullins, are pretty good too.

I’ll end with another confession, I love this show and this has been my favourite night at the theatre this year so far. I’ve already seen some other really good shows but this one’s fun and fun matters.

For further information, and to book online, click HERE.

Age guidance 8+. Please note that School of Rock contains occasional strong language and may not be suitable for very young children. Please be advised that smoke effects and strobe lights are used during the performance. 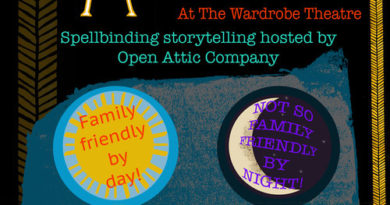