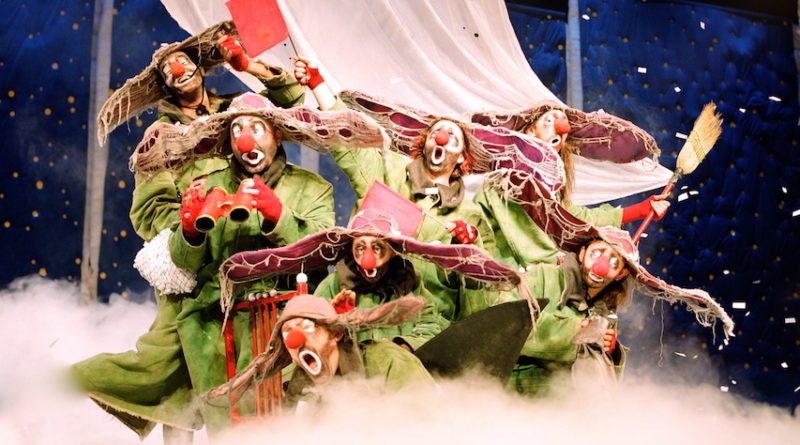 I’m not sure if this is a case of the Emporer’s New Clothes or if I’m just different to everyone else but I’ve just come out of Slava’s Snow Show at the Bristol Hippodrome feeling a little bewilderered and let down. I’d been told so many things about it, how great it is and how people are on repeat visits. But lacking was … exactly what it was about or what happened in it.

I should probably declare myself definitely not a fan of Charlie Chaplin and other silent greats. Slapstick humour does nothing for me. If I’d known that this was essentially a couple of hours of tragicomic mime I maybe wouldn’t have gone; it’s just not something that works for me. Apparently it doesn’t for my 11 year old son either. In fact he said after the first scene that he couldn’t stop thinking about bad things, which isn’t entirely surprising in some ways as it involves a clown putting a noose around his neck and preparing to hang himself.

I’m not quite sure how to describe the Snow Show. I don’t think there is a storyline as such, just a series of possibly connected scenes, many of which are dreamlike. The set and lighting is undeniably beautiful, and some of the special effects spectacular. The audience participation elements were funny, with giant balls being batted around the auditorium, and most impressively of all the bit you see in the trailers with a wind machine blowing paper snow over the audience. I liked a part where the clowns conducted the sounds made by the audience. There were funny bits, especially those involving the shortest clown, but there were entire scenes where I just didn’t get it at all – an endless telephone scene with the yellow clown moving from one giant pretend phone to another, shouting in one and cajoling in the other made me think of abusive relationships, I have no idea if that was the intention or not. I could hear people in the audience laughing hysterically during this, but no one near me seemed to be laughing very much at all.

So I’m probably a culturally illiterate curmudgeon or something, but I’d say if silent comedy is your thing, if you love mime and maybe if you think Vic Reeves and Bob Mortimer were comic geniuses, then maybe you’ll get this. I’ll always prefer something with either characters I feel some emotional involvement with or some great music, or preferably both.