The Bristol Old Vic must seem like a second home for theatre company Kneehigh. I’ve seen past productions Tristan and Yseult and Dead Dog in a Suitcase; both were sumptuous, riotous and with fantastic musical scores, so I was really looking forward to their latest production.

Written by Daniel Jamieson and directed by Emma Rice, The Flying Lovers of Vitebsk comes to the Old Vic as part of their 250th anniversary year. The play tells the story of artist Marc Chagall and the love affair he had with his first wife Bella, which endured over many years. Bella was a muse for Marc and was the subject of many of his paintings. In the work, the couple were often represented as flying, carefree and in love. In reality, they lived through some dark times in history, being grounded in Russia when the First World War broke out and borders were closed and then living through the Russian Revolution. As Jews, they had many restrictions placed on them by the Russian Empire, and times were hard for the couple as Marc struggled to make a name for himself as an artist in his own country, despite success and accolade abroad.

Bright, cultured and with ambitions of her own, Bella ended up abandoning her dreams of being a writer and actress to nurture Marc’s precocious talent. To me, this play was very much the voice of Bella, even though it was telling the tale of the couple and their life together. I’m not sure if the casting purposely set about to have actors with such disparity in height, with Marc Antolin who played Chagall towering over Bella played by Audrey Brisson, but she turned out to be a little powerhouse. I found her mesmerizing to watch and could hardly take my eyes off her when she was on stage. Her singing voice was beautiful and she came across as strong, intelligent and passionate even if she did suffer somewhat by putting her creative energies into her husband’s creative life rather than her own. The love story came across beautifully, the passion of the lovers early courting days and the agony Bella felt as she waited for her man was portrayed with real feeling. Both actors had great voices and presence, and the stage seemed as full as if there were a whole ensemble of other cast members on it.

As with the other Kneehigh shows I’ve seen, the music is a central part of the storytelling. All credit must go to Ian Ross, the composer and musical director, who is also one of the musicians in the show. Inspired by the music of Ruska Roma folk music and klezmer, the soundtrack to this show is rich and evocative of the time, the culture and the setting. I was very struck when Antolin, Brisson and the two musicians (the other being James Gow) took to the stage for their encore. It was incredible to realise that just four people made such a wonderful sound that filled the auditorium so fully.

The Flying Lovers is not as flamboyant as the other Kneehigh shows I’ve seen, but it is as visually stunning. This great love story from history now exists on the stage, and tickets will be hard to come by. But try if you can, this is a beautiful show not just for the old romantics amongst us! The show runs until Saturday 11th June at The Bristol Old Vic. 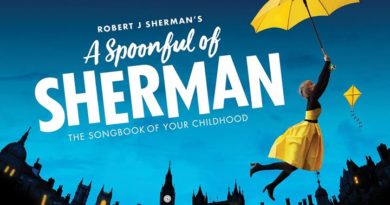 A Spoonful of Sherman at Playhouse, Weston