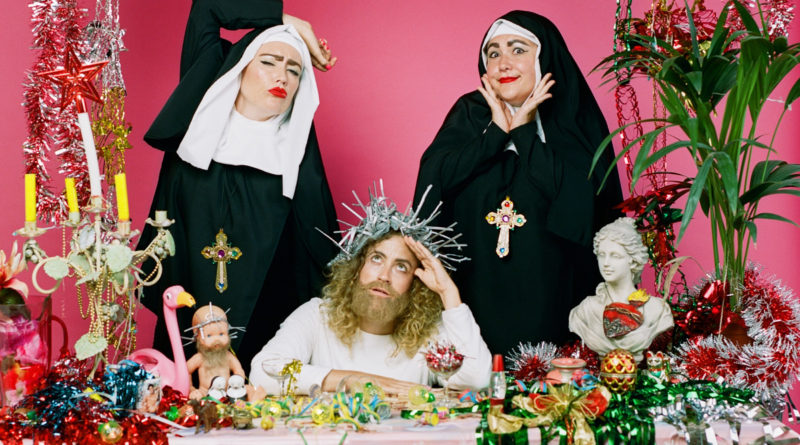 Being welcomed into the theatre by a Nun, who was rather busily running a carpet sweeper around the room while another sister is pounding out Christmas tunes from her Macbook was not how I expected to be spending my Tuesday evening, and yet even with this weirdness, I doubt that I could have felt so comfortably at home anywhere else.

The premise of The Gift of Presents is that it is a surprise birthday party thrown by the sisters, Pauline and Mary-Berry (AKA Bezza) for their Lord and Saviour Shesus, a multi-gendered older sibling to Jesus. The audience hurriedly become willing participants in this bizarre spectacle and are told to hide in the dark and wait for Shesus to arrive for their surprise party. The being who arrives is the dour, bearded, seemingly shy and possibly even ungrateful child of God! The Party is quickly stopped just to appease Shesus and we are then treated to sudden blasts of carefully mimed choral music, downturned mouths and the sort of Godly behaviour so beloved of the oft caricatured Father Ted types of Clergy. This rapidly turns into a vibrant pumping blast of modern music, dancing Nuns and a rocking Shesus. There are so many things I want to tell you, but to do so would spoil the show for you. However, watching a Nun pretend to pull tinsel from the bottom of Shesus was a particular highlight and even with the jaded press show crowd, this went down a storm. The rest of the songs are performed wonderfully, the comedic moments range from subtle genius to overt clowning and the moments of improvisation are done with an almost architectural precision.

There is a great deal of audience participation in this show and in a beautifully crafted moment, we are asked en mass to give our permission to be a willing participant in the show. I rather suspect though that anyone who dared stand up to leave at that point would probably feel like they were taking their lives in their hands as they left, but bravery aside, they would miss out on so much. With full permission given, the audience begin to massage each other. Yes, you did read that right. Complete strangers are encouraged to touch each other, make actual physical contact with people that they do not know! Not only that, they are actively encouraged to speak and communicate with each other, opening up and embracing each other, despite our insecurities. This is a vitally important moment of trust building in the story line of Shesus,  setting us up for the important if devastating reveal later.

We are then led into a group sing-along to the classic of the 80s, Bon Jovi’s ‘Living on a Prayer’, with the words very carefully rewritten. They start so innocently and before we easily led ne’er-do-wells have time to notice, the song turns to a subject matter far more coarse than working at the docks or serving coffee in a cheap diner! For me, this was the first tears of the evening, because I was weeping with laughter, not just at the dirty jokes, but the absolute genius of what they had done. It was so simple and so silly and yet utterly brilliant. Remember though, each of us are in a very safe space and we have all given our full permission to Shesus and the sisters to lead us as they see fit. So even with the dirty innuendos spilling from our mouths, we remain willing participants and we are never made to feel foolish.

The revelation of the show is a powerful blow to the heart, which comes in a moment of near silence. Everything that is wrong with us is the result of the mundanity of evil that happens each and every day in our society. It is the revelation that terrible things happen in the world which fills our souls with self hate and rage. As we react to these terrible things, some of us suffer an almost engulfing desire for suicide or we have the shame of hiding depression, anxiety or other forms of mental illness from our friends, families and loved ones. With every deeply personal sharing from our beloved performers, our hearts break a little more, not just for them, but for ourselves and our society too. The final act of the show is for us all to create within, a moment of healing to save us all from ourselves, we form and sculpt this fragment of light before then giving birth to this healing thing in a parade of yet more wonderfully dirty jokes! It is with no shame whatsoever, that for the second time during the show, I shed tears.

This is a surprisingly clever performance, with far greater depth than many would believe possible given the substance of the show. Small hints made in the beginning are set ups for later reflection and understanding; moments that seem frivolous and silly are actually vitally important towards the end, as we reach the understanding of what we have just seen. The perceived changes in tone are not really changes at all, the whole performance was building to those moments and right at the end, there was a real feeling of acceptance, of having witnessed something potent and special. Yes, it was a very silly comedy, but it was also a sharp parody about the cruelties of life and the hidden insecurities that each of us carry locked deep inside. Exposing our vulnerabilities is never easy and yet this show seemed to do it in a single heartbeat, that lasted for only a few seconds and yet had a resonance that stayed with me even as I drove home afterwards. This is quirky and powerful comedy and to be honest, the clowning and the lascivious humour would be bland or meaningless on their own, had they not been so expertly entwined with such brevity in those final minutes.

This is a show that is aimed at a more thoughtful audience, if you go in expecting only basic Panto and dick jokes, you are going to miss the more powerful messages held within. At the same time, if you go in expecting only high art and social critique, you are going to miss the beautiful silliness and fun. So grab your best friend (I was lucky enough to go with mine) or your spouse and take them to this show. Once you are there, don’t sit there silent and afraid, instead you must participate, sing out loud and embrace the moment because as is explained in the show, you will be a long time dead!

As I was leaving the theatre, I heard some other commentators asking whether the show could be seen as being mildly sacrilegious, with one person even asking if it could be viewed as blasphemous? In the currently global political climate, when religion is a trigger word used to racially segregate people, such accusations of this nature are made without the true understanding of what it actually means. I cannot hide my own agenda here, my driving license has my title listed as Reverend, an honorific I paid good money to buy online. There is nothing in this show that could be called blasphemous or sacrilegious, but there is an important message about the dangerous religion of social media and the toxicity of our socio-economic system. As I have given thought to this wonderful show, I ask myself has it really been so long since the release of Monty Python’s Life of Brian? Why do I raise that question? Because what I have just seen is a valid and worthwhile companion piece. 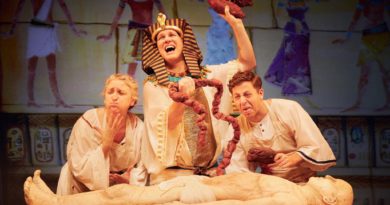 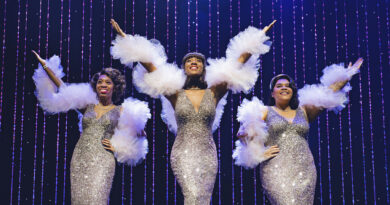